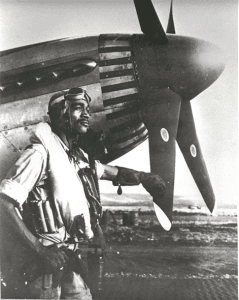 Tuskegee Airmen pilot and notable record holder Lee Archer was born September 6, 1919 in Yonkers, New York and raised in Harlem. He was a graduate of New York University before he enlisted in the U.S. Army Air Corps in November of 1941.

Archer had aspirations of becoming a pilot, but at the time of his enlistment flight training had not yet opened to qualified black service members. Instead, he received training as a telegrapher and field network communications specialist and assigned to a post in Georgia. Then in December of 1942, Archer was accepted into the new aviation cadet training for black Americans at Tuskegee Army Airfield.

Archer earned wings on July 28, 1943 as part of class 43-G-SE with the rank of 2nd Lieutenant. He graduated first in his class. He was assigned to the 332nd Fighter Group of the 302nd Fighter Squadron, who would later become known as the famed Tuskegee Airmen.

While serving in Italy during World War II, Archer flew an astounding 169 combat missions, strafing targets on the ground and escorting bombers on their important missions over dangerous territory.

On October 12, 1944, Archer was a part of a group of six members of the 332nd Fighter Group that shot down a total of nine enemy aircraft while on a strafing mission from Budapest to Bratislava. Archer, flying Ina the Macon Bell, shot down three German Me-109s, and Capt Wendall Pruitt, flying Alice-Jo, show down an He-111 and Me-109. The combined aerial victories earned the duo the nickname “The Gruesome Twosome.” 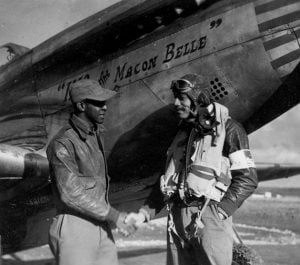 He earned the Distinguished Flying Cross for his efforts, and a spot in the history books. After another victory, he became one of only four Tuskegee Airmen to achieve four aerial victories. During his military career he also received special citations from Presidents Eisenhower, Kennedy and Johnson, along with the Director of the CIA.

He retired from the Air Force with 29 years of service 1970.

Like many of his fellow Tuskegee Airmen, Archer had a successful civilian career following his military service. He was the Vice President for Urban Affairs at General Foods Corporation; CEO of North Street Capital Corp.; and chairman of Hudson Commercial Corp. He also served on the Board of Directors of Beatrice International Foods and the Institute for American Business, a General Motors Venture Capital Subsidiary. In these roles he helped to finance many important companies, including Essence Communications and Black Enterprise Magazine. He later founded the venture capital firm Archer Asset Management.