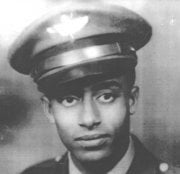 It is an unfortunately reality of war that oftentimes loved ones do not come home. No matter the skill or training, many service members of World War II perished in combat. William Armstrong did not live to see the Allies liberate Europe, but his efforts as a Tuskegee Airmen pilot, and citizen who stepped up to service his country, played a role in that success.

Born October 24, 1924 in Washington, DC, Armstrong was raised along with his sister Evelyn in the west end of Providence, RI by his mother, grandfather and stepfather. He excelled in academics, was a member of the student council and lent his beautiful tenor voice to the Episcopalian Church of the Saviour. His peers described him as handsome and outgoing.

After graduating from high school in 1943, Armstrong’s plans to pursue the education needed to become an attorney we derailed by the War. He joined the U.S. Army Air Corps and was accepted into the pilot training program in Tuskegee. He graduated with class 44-H-SE on September 8, 1944, earning his wings to fly single engine fighters against the enemy in Europe. Armstrong deployed with the 332ndFighter Group to Ramitelli, Italy shortly thereafter. 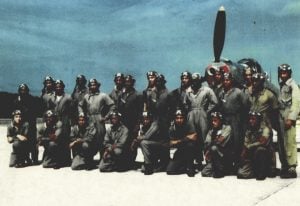 During his time in theater, Armstrong flew bomber escort missions over Europe, protecting American bombers from enemy fire as they dropped their explosive payloads over targets deep within Nazi territory. The skill of Tuskegee Airmen like Armstrong to keep their bombers safe and able to complete their missions earned them the nickname “Red Tail Angels” and were requested by the bomber pilots to escort their missions, regardless of the color of the skin. This was a remarkable acknowledgement, considering the climate of racial injustice that existed in that era.

On Easter Sunday, April 1, 1945, just a month before victory would be declared in Europe, Armstrong’s squadron was engaged by German aircraft in an air battle over the skies of Austria while trying to return from a bombing raid which Armstrong and his fellow Airmen had provided escort protection. 12 German planes went down in that battle, as well as two American aircraft. Armstrong’s plane was hit, and he was killed in action, along with Tuskegee Airmen pilot Walter Manning in another plane. Armstrong’s body was unable to be recovered before the end of the war.

Due to the tenacity and insistence of his stepfather, Nelson Venter, Armstrong’s remains were located in a grave in Austria, and returned home in March of 1950 for burial in a family plot in Providence. He was posthumously awarded the Purple Heart, Air Medal and Presidential Unit Citation.

The local VFW post of his hometown dedicated a memorial in his honor in 1946, but was eventually lost due to redevelopment in the area. He was inducted into the Rhode Island Aviation Hall of Fame in 2009.In 2010, the William P. Armstrong Memorial Square was given a fresh update and re-dedicated with much local fanfare in Providence.

In memory of the service and sacrifice of Flight Officer William Armstrong.