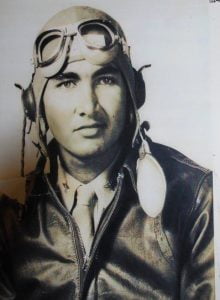 Born in Port au Prince on September 20, 1920. In 1942, he enrolled in the Haitian Army, when Elie Lescot government announced the formation of the Haitian Air Force (Corps d’Aviation). Shortly thereafter, he was assigned to the maintenance department as a mechanic.

His devotion to his work did not go unnoticed by Major Eshelman, director of the Corps. In February 1943, Cassagnol was given the opportunity to be trained as pilot. With S/Lt. Philippe Celestin and Alix Pasquet, he left Haiti to attend the training at the Tuskegee Army Air Field in Alabama. He graduated as well as the other officers Fighter Pilots and returned to Haiti to serve his country. because he never considered himself, in the Haitian sense of the word, a true SOLDIER, but rather a civilian in uniform, he resigned in April 1946 few months after the fall of President Lescot. His resignation was not accepted. Colonel Lavaud one of the executive members of the junta told him that his resignation could give the public the impression that some differences exist among them in the army. When he resubmitted his resignation on July 1946, it was accepted and took effect on August 9, 1946. He remained in the country as an entrepreneur.

In 1947 he obtained his pilot private commercial license and worked as pilot for the Dauphin Plantation. In the 50’ he ventured in the preparation of lumbers for construction and put together a Lumber factory in the Plateau Central. To provide an adequate support of the-day-to-day operation of the plant, he acquired a small airplane (BT-13) for quick access to Port-au-Prince in less than half hour, instead of the two-to-three-day commute on ground transportation. A field of 1200 feet long was prepared for landing and take-off. The authorization to fly given by Cerca-La-Source military center was not an issue and the back and forth over the island by Raymond became routine.

Several members at the Army Headquarters did not like the idea and clearance to fly could only be granted by them in Port au Prince. It became harder and harder for Raymond to obtain the authorization to fly and the airplane was most of the time on the ground and was becoming a burden for the factory. To avoid further complication, Raymond decided to sell the BT-13 to the only possible buyer, the Aviation Corps of Haiti. The field used as one way, so beneficial short and long term to the community and the region was left abandoned. The airplane was used by the Corps d”Aviation in the transport of mail and passengers for a long time thereafter.

Cassagnol’s predicament continued under Paul Magloire, more than ever before, because he did not approve this government’s politic of favoritism “moun pa.” During the 1957 electoral campaign, as he explained on his book, Raymond did not endorse any particular candidate but took a stand against one candidate – Clement Jumelle – who had declared that his government would be a continuation of Paul Magloire’s regime.

Cassagnol was skeptical about the nomination of Francois Duvalier by the army, so like everybody else, he adopted a wait and see attitude. But in less than 6 months Duvalier sent the first signal: “Gratefulness is a weakness”. On March 12, 1958, General Antonio Th. Kebreau, the man who gave Duvalier the presidency was fired by Duvalier. Kebreau, went into hiding until his nomination as ambassador to the Vatican and left the country in January 1959.

The second signal came without wasting time. Duvalier launched his systematic repression against the population and one of his first victims, Yvonne Hakim was severely tortured and left without clothes for death in the middle of the night on Delmas Road.

Cassagnol did not need more evidence to join the rank of opponents that was already growing. He became one of the most farouche opponents of the regime and participated in many attempts intended to overthrow Duvalier. In 1961 he met with General Leonidas Truillo who at that time wanted to eliminate Duvalier one way or another. But on December 1958 the same Trujilio informed Duvalier that he had given a load of arms to Raymond on behalf of Louis Dejoie, ex-senator and ex-candidate who opposed Duvalier, while in hiding after the elections (Mémoires d’un Révolutionnaire – page 150).

On October 8, 1962 fearing for his life as well as his family’s safety, Raymond crossed the Dominican border to seek political asylum. The assassination of Truijilo several months earlier made it possible. On May 1969, Raymond was one of the pilots of the B-25 that dropped the bombs over Duvalier in the National palace.

Then he moved to the United States.

Cassagnol is the last remaining Haitian with silver wings from Tuskegee. He first returned to Haiti in 1986 and now visits the island regularly. And in 1999, he gave 200 acres of his land on the hilly isle to a charitable organization.

Then, in November 2000, Cassagnol returned to Tuskegee. A lot had changed in 57 years.

“I visualized myself standing there as a 22-year-old. Now I’m 81, with goose bumps and remembrances,” he said. “I’m glad I went.”

Cassagnol wanted to visit Tuskegee for some time. But he said he was waiting for the right moment, rather than forcing things.

When the time was right, “revisiting Tuskegee was a dream come true,” the aviator said.