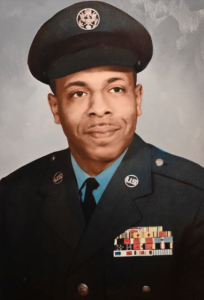 Richard’s family moved in 1924 from Georgia to Winter Park, Florida, when Hall was only 6 months old. He went to high school at Robert Hungerford Boarding School in Eatonville.

Hall was fighting not one but two wars when he was drafted by the U.S. Army Air Force. He remembers the day he got his draft letter in 1942 at age 18. He was attending Xavier University at the time in New Orleans and had joined the Army Air Force Reserves to remain in college.

He would have to fight anyway though: He received orders to report for active duty immediately. World War II was well underway.

“I just wanted to get home safe with all my limbs,” Hall said. “You see guys coming back blind, no legs, no arms. Other guys lost their minds, but I still had my right mind.”

Hall and the other brave soldiers reported to Tuskegee, Alabama, to receive their training. From there Hall joined the 332nd Fighter Group and the 477th Composite Group, which included the 99th Fighter Squadron and the 617th Bomber Squadron.

From the cockpit of his P-51 Mustang and on the ground as a flight engineer, he battled the Nazi war machine many miles away from home.

Hall worked as a mechanic at Ramitelli Airfield in Italy. After World War II, Hall pursued a career in the Air Force, the branch that grew from the Army’s Air Forces. He served in the Korean War and the Vietnam War before retiring in 1973 as a Chief Master Sergeant.

According to Valencia College professor and U.S. Army veteran Capt. John Creighton, the Tuskegee Airmen accounted for more than 15,000 combat stories, 111 German airplanes destroyed in the air and another 150 on the ground, 950 railcars and vehicles destroyed, and a destroyer battleship sunk.

It was the brave actions and perseverance of these African Americans during a time of racial prejudice that led to the desegregation of the military in 1948 under President Harry S. Truman. That allowed future Tuskegee Airman and Lake City resident John M. Gay to join the ranks of the military just three months later — he was honored and saluted at Saturday’s event as well.

Hall served his country over a span of three decades across four continents, working his way up to the rank of chief master sergeant.

Hall has been thanked countless times for his mark on American history, from the Congressional Gold Medal he received from President George W. Bush in Washington, D.C., to the life-sized sculpture in his likeness that sits outside the Hannibal Heritage Center, forever sporting a red Tuskegee Airmen hat and jacket.

It still feels nice to be recognized, Hall said.

“It’s very special,” he said. “People say a lot of nice things about you.

Listen an interview given by Mr. Hall, preserving his wartime memories for generations to come. “Giving the Past a Future, One Story at a Time.” WWII Veterans History Project

“Colonel [Benjamin O.] Davis had us in the theater, the officers and senior enlisted. He said, ‘We’re going to integrate and go to the four corners of the world.’” —Hall speaking at an Orlando concert in his honor in 2012.