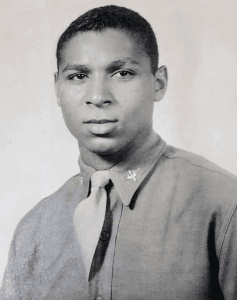 Martin, known as “Fox,” grew up in Iowa and became entranced by airplanes when he attended an air show as a 13-year-old Boy Scout. He persuaded his father to let him take a ride on a Ford Trimotor.

“And the pilot, after starting the engine, buckled me in, he touched me with a wire and shocked me, and he said, ‘You’re going to be a pilot,’” Martin remembered in a video interview.

While still a student at Iowa State University, Martin learned to fly in a civilian pilot training program. In 1942, he graduated with a bachelor’s degree in electrical engineering.

On January 7, 1944, at the age of 23, Martin graduated from flight training at the Tuskegee Army Air Field in Alabama. He was a member of the 100th Fighter Squadron and the 332nd Fighter Group. With the rank of lieutenant, he immediately set sail for Italy and was attached to the 100th Fighter Squadron, which helped provide cover for Allied bombers on missions over targets in Europe.

Martin liked to say he flew “63 and a half” combat missions during World War II.

On December 9, 1944, Martin was returning to base from an escort mission when his P-51 Mustang suffered engine trouble. He was forced to land at a gunnery range Cuetelo, Italy. As the plane fell over the rough ground, the propeller was damaged. Martin was able to walk away from the crash landing.

On March 3, 1945, he was one of 24 Tuskegee Airmen who climbed into their single-seat P-51 Mustang fighters from their base in Ramitelli, Italy, to conduct a rail-strafing mission in parts of Slovenia and Austria. Two pilots did not return — Mr. Martin and Alphonso Simmons.

“We flew over this airfield where there was no opposition,” Mr. Martin said in 2008 at Chicago’s Pritzker Military Museum & Library, “We saw two airplanes parked a little bit off the field, and we said, ‘We’ll get more credit for destroying two airplanes than shooting up a railroad train.’ We went in to shoot up these planes.”

Mr. Martin and Simmons were hit by antiaircraft fire. Simmons was killed.

“I said, ‘I’m not going to fry, I’m going to get out of here,’” he recalled in the Pritzker talk. “I got up high enough to bail out and my beautiful parachute opened and knocked me out — cut my chin open and floated me down to earth.”

He was spotted by members of Tito’s partisan forces, which controlled swaths of Yugoslav territory; Tito became Yugoslavia’s postwar Communist strongman. Taken to a farmhouse, Mr. Martin was greeted by one of Tito’s men as a “warrior on the side of the Allies,” he told the Experimental Aircraft Association. “The guy fried me an egg and gave me a glass of grappa when he found I was hungry, and just told me to sit and wait.”

On March 10, he was taken to Topusko, Croatia, where he met with an Allied mission manned by British soldiers that helped downed Allied airmen. Because Topusko had natural hot springs, Mr. Martin said, it was the ideal place for recovery.

“They could take a bath in the natural hot spring bath house, get rid of all the lice and dirt and whatever, and they had clean uniforms, shoes, food to feed them, whisky, candy, books, a safe house, there was meat and flour and all types of foodstuffs dropped in by parachute to help these downed Allied airmen.”

After a month, he was airlifted to Bari, Italy, and weeks later he celebrated V-E Day in Naples. He soon embarked on a ship for home.

Following the war, Martin received his military discharge at the rank of captain.

Martin earned the Distinguished Flying Cross, The Air Medal with 6 Oak Leaf Clusters, and the Purple Heart. In 2007, Martin was among the recipients of the Congressional Gold Medal at a ceremony honoring the Tuskegee Airmen hosted by President George W Bush.

In 1945, Martin returned to the U.S. after Victory in Europe Day. He looked for electrical engineering jobs, but had a difficult time finding any. At the time people weren’t hiring black engineers. Martin held a variety of jobs including driving a taxi and working in factories. He was hired as a draftsman by the Chicago Park District, and went on to work as an electrical engineer for the city of Chicago. Martin retired after 37 years.

Martin was married for 68 years to the former Odette Ewell. They had four children, Gabrielle, Noelle, Dominique and Robert Martin, Jr. Martin died of pneumonia on July 26, 2018, at the age of 99.