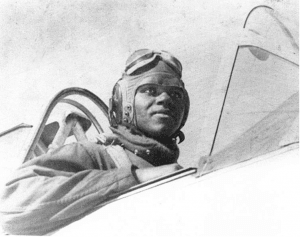 Robert Tennerson McDaniel was born February 28, 1923, in Mertens, Texas, to Alfred and Molly Valerie Queen Esther McDaniel. Robert was the only brother to Gladys and Carrie McDaniel. McDaniel was named after his fraternal grandfather, a pioneer Fort Worth physician.

Dr. McDaniel graduated as valedictorian of his class at I.M. Terrell High School in 1940 and earned a scholarship to Prairie View College.  Three years later, in September 1943, he was drafted into the army; he served as an aviation cadet and U.S. Army Air Force flight officer. He was trained as a bombardier and as a pilot at Tuskegee Institute, Moton Field, and Tuskegee Army Air Field. Flight Officer McDaniel flew the TB-25J, serving as a flight officer with the 477th Bombardier Group.

While continuing training at Indiana’s Freeman Field, he was turned away from the officers’ club. He was one of the 101 black officers that defied a direct order and repeatedly tried to enter the club. They were arrested and threatened with court martial, which could have carried the death penalty during

wartime. The men eventually were exonerated, and the Freeman Field incident helped lead to the integration of the military when on July 26, 1948, President Harry S. Truman signed Executive Order 9981, which ended racial segregation in the U.S. armed forces, saying, “There shall be equality of treatment and opportunity for all persons in the armed services without regard to race.” 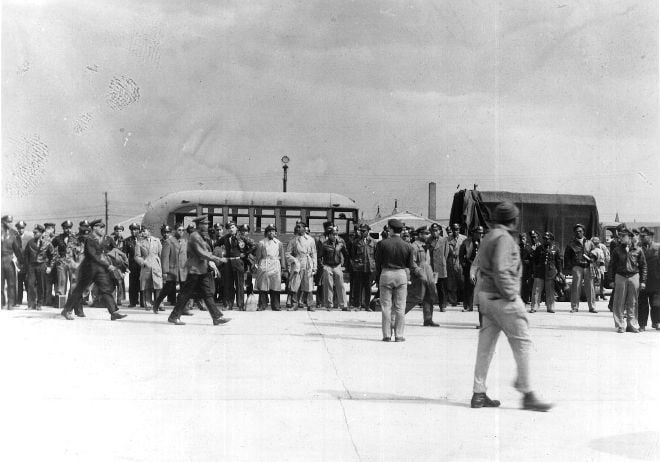 The 101 arrested officers about to board transports to take them to Godman Field for court martial.
Photo taken with a hidden camera to avoid confiscation.

At the end of the war, Robert returned to Prairie View University and then went on to the University of Colorado, earning a BS (Mathematics/Chemistry), MS (Mathematics/Educational Administration) and Counselor Certification. Robert began his teaching career in the Ft. Worth ISD in 1949. During his career he served as Mathematics teacher, volunteer Coach and Counselor at IM Terrell Jr./Sr. High School; Vice-Principal at Dunbar Jr./Sr. High School and Principal at James E. Guinn and Morningside Middle School.

The District inducted him to the Wall of Fame in 2009, along with another Terrell alumni and Tuskegee Airman, Capt. Claude Platte, who served as a flight instructor during the war. Platte, who served in the Air Force until 1965, died in 2013.