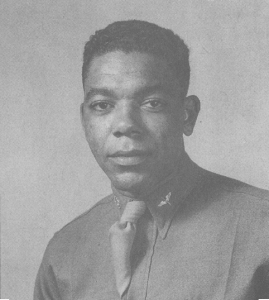 Roger Bartlett Brown, born in 1917, was the son of Thomas W and Etta Brown of Glencoe, New Trier Township, Cook County, Illinois. Glencoe is on the north side of the Chicago metro area. He left a wife, Mabel.

In the 1930 census 12-year-old Roger was living with his parents and 3 older brothers at 352 Jefferson Avenue in Glencoe, New Trier Township, Cook County, Illinois. His father was an insurance salesman. His mother ran an employment business.

Roger went through the Glencoe schools and graduated from New Trier High School in 1935. He worked as a chauffeur in Glencoe and at the Buick defense plant in Melrose Park. In 1937 he married Mabel O’Kelley.

Lt Brown enlisted not long after Pearl Harbor. In February of 1943 he entered the army’s first training program for African American pilots for combat service and completed seven months of primary pilot training at Tuskegee, Alabama.

Lt Brown was assigned to the 100th Fighter Squadron of the 332nd Fighter Group based out of Ramitelli Airfield in the massive Foggia Air complex in southern Italy. His military occupation or specialty was Pilot. Service number assignment was O-814826.

Lt Brown died on 14 Jun 1944 when his plane crashed during a training flight. He was lost when his P-47 was seen to crash during a training mission. It was not seen whether he bailed out or not. At some later point his remains were found. The crash took place in the Apennine Mountains not far from Ramitelli. The official cause was given as engine trouble. Eyewitness account of Lt William T. Mattison: “On 14 June 1944 at 1620 hours, I was leading a two-ship flight of P-47’s [Thunderbolts] on a training flight. Lt. Brown was flying my wing and I noticed him dropping back. At the same time, I throttled back and I noticed his ship was smoking and increasing to a dense black smoke. He then was losing altitude. I told him to bail out, but I did not see him jump due to scattered clouds and haze. I saw his plane hit the ground and burst into flame. I circled three times trying to give the May Day and transmitting for a fix. My flight was above the clouds the entire trip until Lt. Brown went down. I told him to jump when he was about 5,000 feet above the mountains, my altimeter was reading 9,000 feet.

We both went down through the clouds and I was only able to see the plane crash and burst into flame. I had very poor radio contact and was unable to understand any transmission.” Roger Brown’s family was notified shortly after the crash that he was missing in action but did not officially learn until September that he had died.