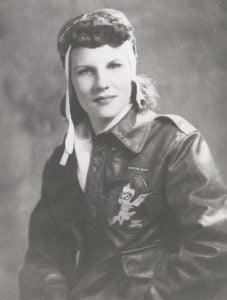 Charlyne was born Rosa Charlyne Creager in Noble, Oklahoma to Charles and Rosa Creger on Dec. 24, 1918. Her father was a blacksmith and a Tennessee Bluegrass fiddler and her mother was born in Oklahoma Indian territory, back before houses, when there were hillside dugouts with animal skins over the door.

Back in the early 1920’s, the local newspaper announced that the famous Wiley Post would take passengers for a ride in his airplane for a penny a pound, or for a collection of bread wrappers. Charlyne didn’t have the pennies, but she saved up bread wrappers from all over the neighborhood. When she got to the airfield, Wiley told her she was too little for the seat belt, so, Charlyne asked if her cousin could ride with her. Wiley said yes, and, thanks to her cousin sharing the seat belt, she got her very first airplane ride. That was when Charlyne became ‘hooked on flying!

After she graduated high school in Norman, Oklahoma, she worked as a professional dancer for Catherine Duffy’s Productions in Oklahoma City and then later became a professional model for Kickerknick Lingerie.

During WWII, she worked at Douglas Aircraft as a “Production Control Booth Expeditor” which, according to Charlyne, was just a fancy title that meant she counted the screws.  She learned to fly in Norman, Oklahoma and had to get special permission to leave her necessary war job to apply for WASP training.  When the Douglass people told her ‘no–that she was important to their production line’, she told them that they either let her leave or she would quit, because whether they liked it or not, she was going to fly for her country.

She entered WASP training in 1944, and graduated as a member of the very last class of WASP to graduate, Class 44-W-10. She was stationed at Waco Army Air Field as an engineering test pilot and, after the WASP were disbanded, worked as a salvage pilot and flight instructor, but, eventually, as Charlyne said, “I had to face reality, NOBODY wanted women pilots!” So, she ‘made lemonade’ and reinvented herself, working at the Crippled Children’s Hospital in OK City to assist the nurses, then completing nursing training at Houston’s Herman Hospital followed by Shriner’s Hospital in Shreveport and joined the USAF as a nurse in 1951, serving during the Korean War.

When she was 35, she applied for medical school but, she was told she would be taking a man’s place and was refused admission.  So, once again, she ‘made lemonade’ and applied to go to London and study under the Queen’s anesthesiologist. Eventually she became the Chief of the Anesthesia Dept. at the Earl K Long Hospital in Baton Rouge.  According to Charlyne, “nothing is really impossible if you’re serious…and you follow thru.”  Course, she also said, “I made a lot of lemonade.”

In the course of an incredibly successful career, Charlyne managed to travel the world, making an incredible trip with many of the WASP to visit the “Night Witches” (the Russian women pilots of WWII).

2002, Charlyne was inducted into the Aviation Hall of Fame in her home state of Oklahoma and in 2003, she was inducted into the Daedalians, an elite group of military pilots. She was thrilled about this because this very exclusive group had been started by Hap Arnold, Jimmy Doolittle and Billy Mitchell. Now, this is a very big deal, for the WASP to finally be recognized as veterans by this group of mostly male pilots!

Most of all, Charlyn loved being a WASP.  Of all the things she did in her life, it was the one thing she was the proudest of.  “Out of nothing, it made me something, because it gave me the courage to try anything!” and she loved Avenger Field.  Charlyne was the first to step up and financially support the building of the WASP Museum, at Avenger Field n Sweetwater, Texas, although she specified that the amount of her gift not be made public. She has been a constant cheerleader and encourager, and was looking forward to one day being one of the WASP who would place her ‘gold’ shovel in the dirt at Avenger Field, and ‘break ground’ for the WASP Museum. 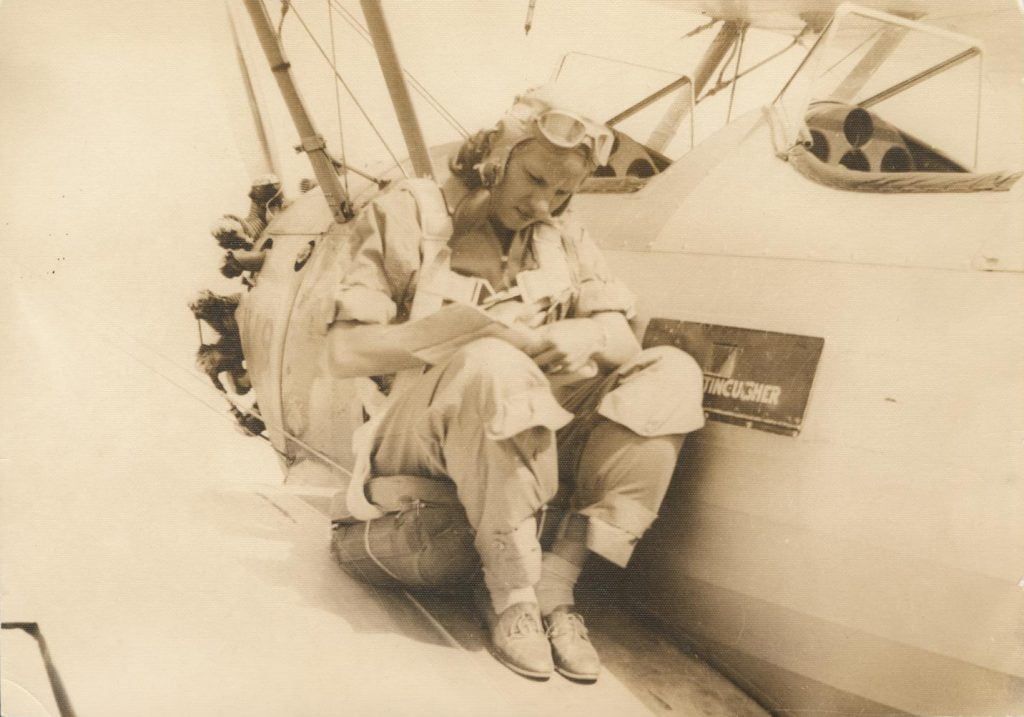 Charlyne Creger, wearing a flight suit and parachute while crouched on the wing of a plane and writing in a notebook