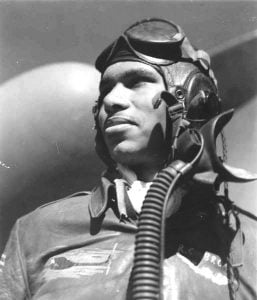 Former pilot and Tuskegee Airman Roscoe C. Brown, Jr. led a life of visionary public service in fields as diverse as the arts, education, the military, and government. He is considered by many as one of the country’s most distinguished African-American advocates.

Brown was born in Washington, D.C. in 1922. His father, Roscoe C. Brown Sr. was a dentist and an official in the United States Public Health Service who was born as George Brown and had changed his name to honor Roscoe Conkling, a strong supporter of the rights of African Americans during Reconstruction. His mother was the former Vivian Berry, a teacher. 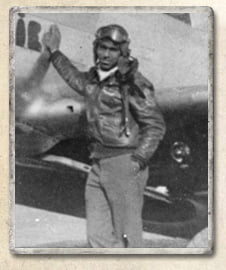 Brown flew his first combat mission in August 1944, escorting B-24 bombers over the Ploesti oil fields in Romania. He completed 68 combat missions flying the P-51 Mustang, escorting B-24 Liberator and B-17 Flying Fortress bombers over Germany, Austria, and the Balkans and conducting low altitude strafing missions over enemy airfields and rail yards.  The highlight of his combat career occurred on March 24, 1945, during the 15th Air Force’s longest mission.

While escorting B-17s over Berlin, he became the first 15th Air Force fighter pilot to shoot down a Me 262 jet fighter.  The 332nd Fighter Group received the Presidential Unit Citation for this mission, the highest honor bestowed upon a combat unit.

Brown later downed a German Fw 190 fighter.  For his achievements in combat, Brown was awarded the Distinguished Flying Cross and the Air Medal with eight Oak Leaf Clusters.

In June 1945, he was appointed to the position squadron commander of the 100th Fighter Squadron of the 332nd Fighter Group.

In total, Dr. Brown flew 68 combat missions, a combination of strafing runs and escort missions for heavy bombers and P-38 reconnaissance flights. He downed a German jet near Berlin during an escort mission on March 24, 1945. 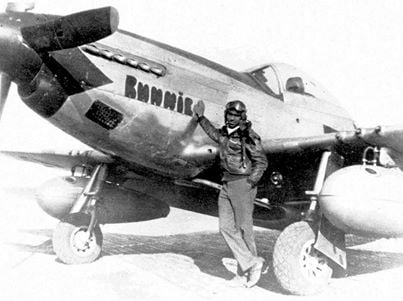 The tremendous accomplishment of the Tuskegee Airmen speaks louder than words and provided the compelling evidence that led to the integration of our nation’s armed forces.  The 332nd’s successful combat record, which included the downing of 111 enemy aircraft in flight and 150 on the ground, was a principal factor in President Truman’s decision in 1948 to integrate the armed services.

Brown left military service in 1945 with the rank of captain.  He earned his bachelor’s degree from Springfield College in Massachusetts and later earned a Ph.D. from New York University.  He has pursued a successful career in higher education ever since.  For over 25 years he was a full professor at NYU, and was Founding Director of the University’s Institute of Afro-American Affairs.  Upon retirement at the end of a 16-year tenure as President of Bronx Community College of The City University of New York (CUNY), Brown created the Center for Urban Education Policy at the CUNY Graduate School and University Center and has served as its Director since 1993.