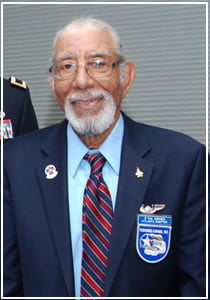 Archer first tried to join the U.S. Navy and the U.S. Marine Corps when he was 15, but he was told to come back when he was old enough to serve. At 18, he joined the U.S. Army and was assigned to the Tuskegee Airmen, where he trained as an airplane mechanic and aircraft instrument specialist.

“It struck me immediately, when I reported into this base, that these guys, starting with the MPs at the gate, were really sharp – they were dressed sharp, their presentation was good, ” he said in the PBS interview. “And then I saw the first Black officer and so I had no idea at that time all the officers were black and everybody else was as well.”

Archer was an instrument specialist on the P-47 and C-47 aircraft and later a crew chief. His career spanned three wars and eventually included time as an instructor for TITAN I Intercontinental Ballistic Missile (ICBM) Squadrons.

He became a crew chief and later served as an instructor for TITAN I Intercontinental Ballistic Missile (ICBM) Squadrons. Archer became the president of the Atlanta chapter of the Tuskegee Airmen, Inc. He was among the Tuskegee Airmen who were presented with the Congressional Gold Medal. In 2013, Rep. Henry C. Johnson, Jr. honored Archer on the floor of the U.S. House of Representatives and proclaimed May 18 to be Val Archer Day in the 4th Congressional District of Georgia.

After basic training at Wichita Falls, Texas, Val attended technical training at Geiger Field, Spokane, WA and subsequently at Chanute Field, IL. He was fortunate to be assigned to the 332nd Fighter Group, aka the (Tuskegee Airmen) at Lockbourne Air Base in Columbus, OH. From January 1946 – September 1949, he was assigned as an airplane mechanic and later as an Aircraft Instrument Specialist to try the army and on that day, they were processed along with the other men. They passed all the written tests and the physical exam.

“I’m proud of the legacy that we have. A lot of us came from all over, Tuskegee Airmen, we had people who came off of farms and those who came out of cities, but what came out of that experience had an impact on our whole culture at that time, largely because of the success that we had and what that meant for other opportunities.” —from a 2016 interview with the Montgomery Advertiser