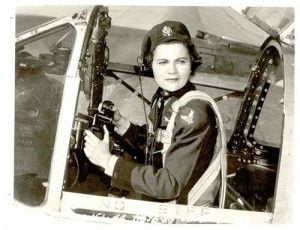 Born on December 29, 1916, she grew up in the small town of Grapeland, TX. Ruth attended Baylor in 1934, about 130 miles east of Waco–but college wasn’t her first choice. From an early age, she wanted to fly, only attending college after making a deal with her parents that after she graduated from Baylor, then she could attend flying school.

After earning her business degree in 1937, she went on to earn her private flying license, and in 1939, borrowed $1,500 to buy her first plane. Three years later, she received a telegram inviting her to join the military’s new program for female pilots.

“I went home and made arrangements to sell my airplane. And on December 15th, I reported to Houston to the second class of 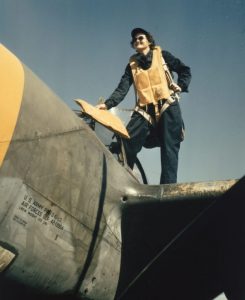 Ruth prepares to ferry a Lockheed P-38 Lightning across the country.

After six months of training, she reported to the 5th Ferrying Group in Dallas, flying brand-new planes from the factories to the training fields. Helm flew a variety of planes all across the U.S. until the group was disbanded in December 1944.

“Then I went back to Grapeland, back to my business,” she said of her return to the family’s auto dealership. Helm continued to fly in her spare time, including frequent trips back and forth to Wyoming where she and some WASP friends in 1946 purchased a ranch. It was there that she met the man who would become her husband, Slats Helm. The couple went on to have two children, Sidney, BA ’74, and Jay, BA ’80, who each graduated from Baylor, and Helm was an honored guest in the 1999 Baylor Homecoming Parade. But she will forever be remembered for her military service.

“I think [our legacy] will be that we were a group of women who loved to fly and were willing to do whatever it took in the way of study and skill and character to accomplish that–and in a man’s world,” she said. “But we were accepted because of our ability and qualifications, and that was all that was necessary.”

Throughout her life Ruth’s faith in God was her strength and comfort, and she eagerly served in every church she attended. In her last church, she actively helped develop two projects to minister to the larger Tucson Community: the Old Pueblo Foundation, which provided several halfway houses for men and women; and the Institute for Better Education. Ruth was preceded in death by her husband and granddaughter, Andrea Faith Gregory. She is survived by her children and their spouses, John Gregory and Regina Helm and four grandchildren, Jeremy and Charissa Gregory and Jessica and Jordan Helm.

Video of WASP Ruth Dailey Helm, talking about ferrying aircraft for the AAF during WWII.