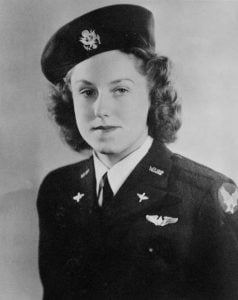 Ruth Humphryes Brown
Class 43-W-8
November 11, 1921 – December 30, 2010
Planes flown: PT-19, BT-13, AT-6, AT-11, B-26
Training Location: Avenger Field (Sweetwater, Tex.)
Assigned bases: Childress Army Air Field (Tex.) and Harlingen Army Air Field (Tex.)
“I heard about the (WASP) program–and all the gals were trying to do something for the war effort.  It was either that or Bundles for Britain and I decided flying sounded a little more exciting than knitting…”

Ruth Brown from her interview: Wings Across America

Born Ruth Boettcher Humphreys on November 11, 1921 to the prominent A.E. Humphreys family of Denver, she grew up surrounded by the beautiful mountains of Colorado, steeped in the history of Colorado’s 19th century mining, oil and manufacturing industries and her father’s love of aviation. She attended Kent School and later Miss Porter’s School in Connecticut and Finch College in New York City.

Ruth was determined to help her country during World War II.  Once she learned the requirements for acceptance in the Army Air Forces Women’s Flying training program, she decided it was time to learn to fly, and immediately began taking flying lessons.  Eventually, she completing the 35 required hours, applied and was accepted into the Women Airforce Service Pilots program, class 43-W-8, leaving her beautiful mountains to travel to Avenger Field in the middle of West Texas. It was there that Ruth, along with 47 other young women pilots, completed training and earned her WASP wings on December 17, 1943.

After the war, Ruth became very interested in skiing and began spending time in Aspen with a cadre of Denver friends who were interested in creating a ski area. Among them was D.R.C. Brown, whom she married in 1947, the same year he founded the Aspen Skiing Corp. and marked the rebirth of the little-known mining town as a premier international resort destination.

In 1959, Brown established the Ruth H. Brown Foundation, and began funneling her time and money into nonprofits and causes close to home and to her heart.  She was a patron of the arts as well as a participant in workshops at Anderson Ranch Arts Center in Snowmass Village.   Her philanthropic efforts included founding the Blind Outdoor Leisure Development program, which taught the blind how to downhill ski and the first expansion of Outward Bound’s programs to America.