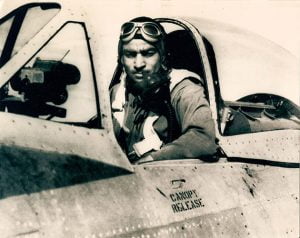 Spann Watson was an American military aviator and civil servant who served with the Tuskegee Airmen during World War II. He flew over 30 missions in North Africa, Italy and Southern Europe. On March 2007, Watson attended a ceremony in the U.S. Capitol rotunda, where he and other surviving veterans of the Tuskegee Airmen (and their widows) were collectively honored with the Congressional Gold Medal in recognition of their service. Following the ceremony, the original Congressional Gold Medal was taken to the Smithsonian Institution, Air and Space Museum. It was later transferred to the National African-American Museum, where it currently sits.

Watson spent his early life on the family farm outside Johnston, South Carolina. In 1927, the family moved north to Lodi, New Jersey, where he completed his primary education and attended Hackensack High School. In 1937, he enrolled at Howard University as a Mechanical Engineering student and earned a private pilot’s license.

Watson enlisted as a Flying Cadet in November 1941. Completing pilot training at a segregated Tuskegee Army Air Field, in Tuskegee, Alabama in 1942, he became an original member of the 99th Fighter Squadron, the first group of Tuskegee Airmen to fight in World War II and the forerunner of the 332nd Fighter Group.

In April 1943, he was among the first 27 pilots (classes 42C – 42H) of the 99th Fighter Squadron commanded by then Lt Col Benjamin O. Davis, Jr., deployed to Casablanca. On June 9, 1943, as a member of a flight of six P-40s, led by 1st Lt Charles Dryden, he participated in World War II’s first aerial combat engagement between black Americans and the Luftwaffe. He flew combat missions with the 99th, flying P-40’s from North Africa, Sicily and the Italian mainland. Returning to the United States as an instructor pilot in the newly formed 332nd Fighter Group, he flew the P-39, P-47, P-51 and B-25 at Selfridge Field, Michigan, Walterboro AAF, South Carolina, Godman Field, Kentucky, Freeman Field, Indiana and Lockbourne AFB, Ohio. While at Freeman Field, he participated in the “Freeman Field Mutiny” against segregated base facilities. After the war, he served as the 99th’s Operations Officer until the 332nd was disbanded with the integration of the Air Force in 1949. Later assignments included Manager, Air Traffic Control Facilities, Hawaii and Chief Controller for Air Defense Control Centers in Long Island, New York, Misawa, Japan and Taipei, Taiwan. In 1962, he became Director, Air Defense Center, Stewart Air Force Base in Newburgh, New York, and in 1963, Team Leader, Regional Air Inspector General’s Office, Northeast, also at Stewart.

Spann’s Air Force career lasted over 23 years, during which he qualified as a Command Pilot and accumulated over 5000 flight hours. He retired from active duty as a Lieutenant Colonel on December 1, 1964.

In 1965, he began a 27-year civilian career with the Federal Aviation Administration (FAA), initially serving as an Equal Opportunity Specialist and later as a Senior Air Traffic Specialist and Military Air Traffic Liaison. During his time at FAA, he mentored military and civilian aviation professionals and assisted more than 30 African-Americans who went on to attain appointments to Annapolis, West Point or the Air Force Academy. He retired from the FAA on August 3, 1992.

He was a founding member and two-term president of the Tuskegee Airmen Incorporated, and a signatory of its Articles of Incorporation.