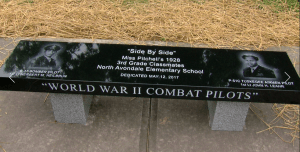 Last week a very special dedication was held at a local school in Cincinnati to unveil a memorial courtyard honoring two remarkable World War II combat pilots – 1st Lt John H. Leahr, a Tuskegee Airman who flew the iconic P-51C Mustang, and 1st Lt Herbert M. Heilbrun, B-17 bomber pilot. The Tuskegee Airmen drew praise for their excellent skill at escorting bombers during dangerous missions over Europe during the war. These two pilots would discover later in life how their paths had crossed in a most unique way.

The school was once North Avondale Elementary School, where they were both third graders in 1928. However, because of racial issues and divisions in America, they never got to be friends.

They didn’t meet until Mr. Heibrun, in his eighties, decided to attend a Tuskegee Airmen event in downtown Cincinnati to thank any Tuskegee Airmen he could meet. During the war, he credits the Tuskegee Airmen for “once saving his butt.” He was directed to Mr. Leahr and he gladly got his opportunity to say thank you. 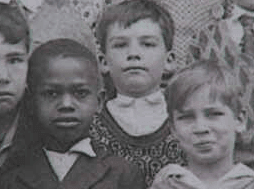 Over time, they discovered that they had lived in the same community about a mile apart. After looking at old school photos, there they both were, in Miss Pitchell’s 3rd grade class picture.

Most importantly, by fate it would seem, it turned out that Mr. Leahr was the actual Red Tail pilot who had escorted Mr. Heilbrun back to his base where he could safely land his B-17 Bomber! When they compared their logbooks, they discovered that 1st Lt Leahr had escorted 1st Lt Heilbrun on two separate occasions. The most notable was the time when Mr. Heilbrun’s B-17 had been hit. That’s when Mr. Leahr escorted him safely back to his base. 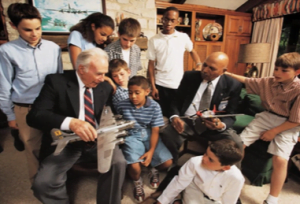 Heilbrun and Leahr sharing their story with children in years past

They became close friends and enjoyed telling stories of their military experiences. For years they spoke to many audiences, sharing their unique friendship with people of all ages. They were even the subject of a book Black and White Airmen: Their True History. 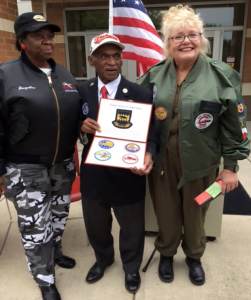 For several years, it had been the vision of Tuskegee Airmen Leslie Edwards – Flight Chief with the 477th Bombardment Group – to create a permanent marker at the school in honor of these two veterans. As members of the Greater Cincinnati Chapter of Tuskegee Airmen, Inc., Diane Hamm and myself assisted Mr. Edwards with fundraising and the dedication ceremony.

At the event, a 6th grade student from the school led us in the Pledge of Allegiance, which was followed by a 21-gun salute and taps played in honor of Mr. Leahr, who passed away in 2015. Mr. Heilbrun, at age 96.5 years, was present at the dedication ceremony and wa

s the first to sit on the memorial bench especially made to honor him and his former classmate. Students from the school, staff and many people from the community participated in the event. 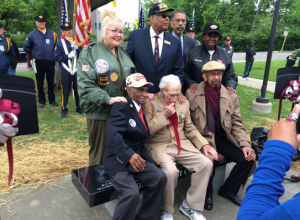