Spurgeon Neal Ellington was born October 17, 1919 in Winston-Salem, North Carolina to James A. and Erma W. Ellington. His father operated a grocery business out of their home.

Spurgeon graduated from Atkins High School and Winston-Salem Teachers College, finishing in 1939. According to the 1940 US Census, he was an elementary school teacher at a private school for black children.

In 1941, he registered for the draft in Winston-Salem and gave his employer as J.T. Daniels in Rocky Point, NC. John Daniel and his wife Leona operated for many years the Pender County Training School, one of the many schools for black children built with assistance from the Rosenwald Foundation. In the 1950s, PCTS was sending 25% of its graduates to college, a record unmatched by all but a few elite white high schools in the state. The Daniels’ papers are on deposit at the University of North Carolina – Wilmington.

In April, 1942, Spurgeon enlisted in the US Army at Fort Bragg and requested assignment to the Tuskegee pilot training program. On May 28, 1943, he won his wings as a part of class 43-E-SE and was assigned to the 100th Fighter Squadron, 332nd Fighter Group. That summer, the 332nd moved to Michigan for advanced combat training. 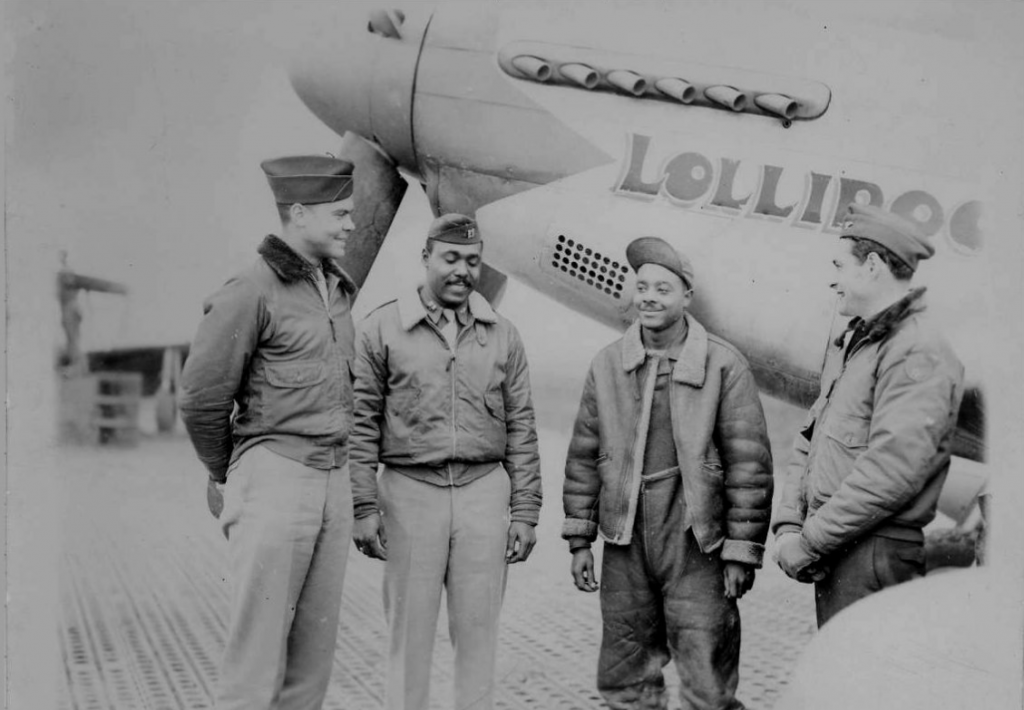 Meanwhile, Tuskegee’s first graduates, the 99th Fighter Squadron, were successfully flying combat missions in North Africa, the Mediterranean and Italy. But the old racist mentality was still around. One general, who I will not bother to name here, wrote a detailed critique of their work, stating that they were subpar and should be relegated to coastal patrol duties. It took an investigation by none other than General Hap Arnold himself, the commandant of the US Eighth Air Force, to reverse that nonsense.

So, by the time that the 332nd, began preparing for deployment overseas in December of 1943, the issue had been settled. On January 3, 1944, the 332nd departed Hampton Roads for Sicily. Ironically, Spurgeon’s 100th Squadron was transported on HR-810, the SS John Motley Morehead, named for a former governor of North Carolina who had been a major slave owner and leading secessionist.

On February 1-3, 1944 the 332nd disembarked at Bari, Taranto and Naples, Italy. In mid-February, the 100th Fighter Squadron flew its first combat missions. Soon thereafter, they were assigned to the 15th Air Force.

On D-Day, June 6, 1944, one of their number, Lieutenant Leonard Jackson, crash landed in no-man’s land. Much to the joy of his comrades, he reappeared the next day herding two German POWs at pistol point.

The next day, the 332nd began flying hundreds of missions combining long range bomber escort sorties and short-range strafing sorties against enemy targets in Italy, Germany, Austria and elsewhere. On July 9, they flew an escort mission protecting B-24s attacking the massive oil refinery at Ploesti, Rumania, one of the most important bombing missions of the war. That raid was led by Major Paul Tibbets and his bombardier, Tom Ferebee, of Davie County, NC. Tibbets and Ferebee would later be the pilot/bombardier combination on the Enola Gay which dropped the first atomic bomb on Hiroshima.

After that, the 332nd almost daily flew important mission after important mission. Things began seriously cranking up in October. On the 7th, they escorted bombers from the 5th Bombardment Wing to an oil refinery in Vienna, Austria. On the way, to the target area, three P-51 Mustang pilots disappeared.

“I was flying between layers of overcast,” 1st Lt. Spurgeon N. Ellington wrote in a military report. “Flight Officer Woods was flying my wing. I gave the signal for more power to pull up over the overcast and the number three man shot under me. At this instant my motor cut out as I pulled up to keep from running over the number three man, causing me to flip into a spin in the overcast. This is the last I saw of Flight Officer Woods.”

About 20 minutes later, 2nd Lt. Roosevelt Stiger crashed into the Adriatic Sea after reporting mechanical trouble. Lt. Robert H. Wiggins was forced to crash-land after his plane was hit by anti-aircraft fire.

On October 11-12, they strafed railroad and river traffic along the Danube River from Budapest to Bratislava, destroying 17 enemy aircraft on the ground and shooting down seven Messerschmitt 109s. For his heroic actions on those days, Lt. Spurgeon Ellington was awarded the Distinguished Flying Cross.

On December 10, 1945: Lieutenants Spurgeon N. Ellington and Richard W. Hall were killed in an airplane accident while stationed at Tuskegee Army Air Field. Both had graduated from advanced pilot training there in 1943, had served in combat overseas, and had returned to Tuskegee Army Air Field to train other black pilots. A simple pilot’s mistake accomplished what no German pilot could. Spurgeon’s body came home on a train and was buried at the Odd Fellows Cemetery in Winston-Salem. 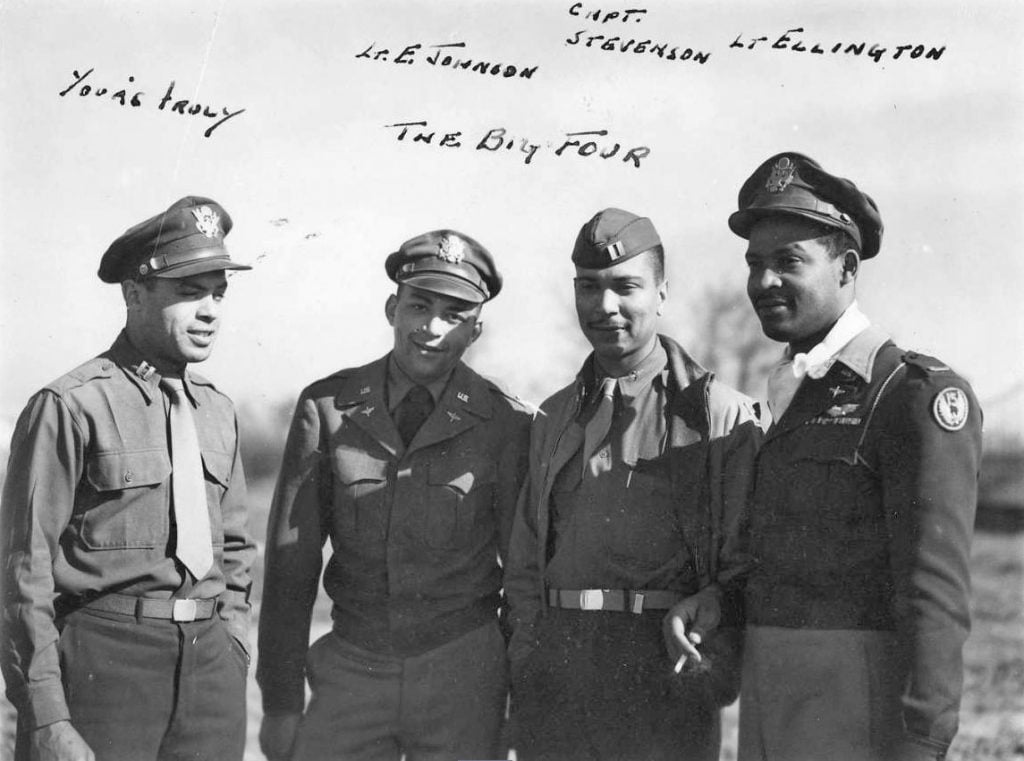 In his book, The Tuskegee Airmen: The Men Who Changed A Nation, Charles E. Francis wrote: “One of the most unforgettable characters I have ever met was Lieutenant Spurgeon Ellington. If there was ever a proud man, it was Ellington. He was not only proud of being a pilot, but proud in general. To him, there was only one person – Ellington. He figured he could out-talk and out-smart anyone. Needless to say, he also pictured himself as God’s gift to women.”

Francis tells the story of how, after receiving his wings, Spurgeon flew home for a visit and buzzed Main Street in the Twin City, for which he was later court martialed and fined back at Tuskegee, then immediately forgiven.

“Perhaps it was Ellington’s showmanship and ego that largely accounted for his success in combat. He could not conceive of any German pilot capable of shooting him down.”

And none did, which earned him an Air Medal with four oak leaf clusters and the nation’s third highest valor medal, the Distinguished Flying Cross.