Support the legacy of the Tuskegee Airmen 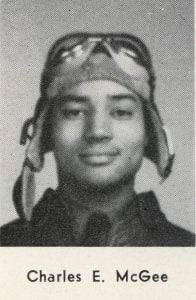 As one of the original Tuskegee Airmen, Colonel Charles McGee knew what it meant to face overwhelming odds.

He and his fellow Tuskegee Airmen are credited with some 15,500 combat sorties. They earned a reputation for excellence as escort pilots, because of their unwavering commitment to staying with the bombers they were assigned to protect.

We believe Colonel McGee’s story still contains lessons that Americans of every generation ought to hear. He has lived through some incredible history, and is proud to be a Tuskegee Airman.

The truth is, we simply could not continue our work without you. Your support is extremely appreciated.

When Charles McGee joined the War effort in the 1940s, the U.S. military still upheld a 1925 report published by the Army War College full of cruel and racist remarks about African Americans’ intelligence. But in 1941, The U.S. Army Air Corps opened a program that allowed African Americans to train and become licensed military aviators.

Right around that time, news of the Army’s recruiting efforts began to spread through the black community. Colonel McGee already had a draft card, so he filled out a pilot’s application.When he got the chance to go to Tuskegee, he could feel just how different things were as he entered the South. Their facilities were segregated, a situation that was new to him.

What he is most proud of is that he gave all he could, even as he battled the doubts and hatred rooted in the racism that was still prevalent in American society. The values and lessons he held onto gave him strength.

These lessons shaped his life, and he has worked hard to pass them on. He tells youngsters all the time, “The things you do to improve your own life are also strengths to the country.

Will you help the CAF Red Tail Squadron® pass on these lessons? Both to honor American heroes who defended our freedom…and to inspire greatness in the next generation?

McGee graduated from primary flight training at Tuskegee in 1943 and was commissioned to the 302nd Fighter Squadron, one of the four all-black units of the 332nd Fighter Group. They flew sweeps – sweep in and strafe targets on the ground – and bomber escort missions. 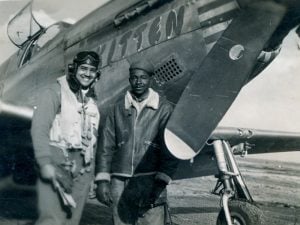 In combat, the Airmen painted the tails of their P-47s to make it easier for the bomber pilots they were protecting to identify them. McGee told History Net a few years ago that everything changed for him when he took his first flight in the P-51C. He soon flew the P-51C regularly, and named it Kitten, his wife’s nickname. His crew chief, Nathaniel Wilson, kept it purring, too.

When enemy airplanes appeared on bomber escort missions, commander Colonel Benjamin O. Davis Jr. ordered one airplane to pursue while the rest stayed with the bombers to protect against enemy fire. Because of this, bomber pilots often asked specifically for the “Red Tails,” and Col. Davis renamed his airplane By Request.

Even amidst the doubts of white officers and the humiliation of segregation, Col. Davis inspired his men to RISE ABOVE™ and focus on their skill as aviators. He often said, “Excellence is the best response to racism.”

Discipline. Commitment. Strength of Character. These are the lessons of the Tuskegee Airmen. Lessons that are every bit as applicable today as they were in the 1940s. Lessons that can help youngsters gain the strength to overcome adversity in their own lives. 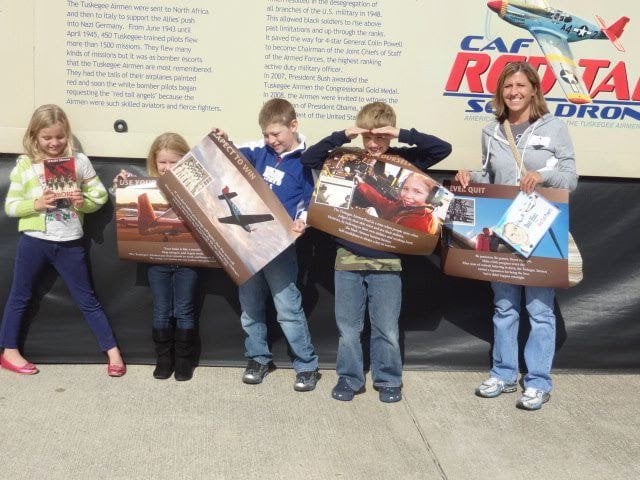 You can help us give even more kids free dog tags inscribed with the Six Guiding Principles, as well as educational materials that teachers and youth leaders can share with boys and girls across the country.

Donations of any size will be appreciated and put to good use. There are several ways you can allocate your support. Please consider supporting the CAF Red Tail Squadron’s educational outreach efforts to inspire the next generation to RISE ABOVE.

Make a gift that will send our Inspiration Pack of educational materials direct to a classroom in need. Impact students with the important lessons and principles of the Tuskegee Airmen!

Showcase your commitment by making a donation of $50 or more to ensure the history and legacy of the Tuskegee Airmen is never forgotten by adding your name to the online Honorary Flight Log. 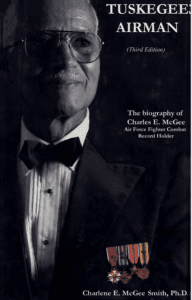 Tuskegee Airman Col. (Ret.) Charles E. McGee stayed active duty in the United States Air Force after World War II. During his service, he was called upon to fly 409 missions, totaling 6,100 hours of flying in over three wars: World War II, Korea and Vietnam. He was enshrined in the National Aviation Hall of Fame in July 2011. This fascinating book, written by his daughter, outlines his experiences as a military pilot, patriot and family man.

On behalf of the CAF Red Tail Squadron, thank you so much for supporting this critical work. Your partnership will help ensure the inspirational message of the Tuskegee Airmen reaches people across the country, and keeps the history and legacy of these great American heroes alive for generations to come!