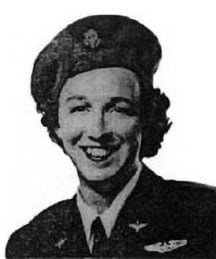 Susan entered WASP flight training at Avenger Field, Sweetwater, Texas in September 1943 and graduated on 11 March 1944. She was then stationed with the 33rd Ferrying Group at Fairfax Field, Kansas City, Missouri.

She was killed while piloting BT-13B #42-89841 Valiant aircraft of the 33 Ferry Group, WASP Squadron, based at Fairfax Field, Kansas City, Kansas. The Valiant took off from Columbia Army Air Base, South Carolina 4 July 1944 at 1130 hours. At three miles northwest and beyond the runway, at approximately the 1500-foot elevation, the aircraft experienced a collision in full flight with an object other than an aircraft. It was flying normally until it made a sudden peel to the left in a nose-down attitude and continued until it hit the ground, hitting the left wing first, and cartwheeled for several hundred feet, breaking apart and burning. It was noted by witnesses that there appeared to be a B-25 aircraft at approximately the same level prior to the aircraft breaking to the left. From the sound of the engine, it is believed that the Pilot, Clarke, changed the propeller control to a full low pitch and advanced the throttle to the full position.

It is noted that Lt Harry C Thomas was on the flight as a Passenger to Camp Davis NC, and was on the plane during the previous leg of the journey from the Atlanta Army Air Base, and had approached Miss Clarke there to ask for a ride as a passenger. Prior to taking off from Atlanta, the plane had not undergone a preflight inspection.

The crew members were:

Her brother, Lt George Hyde Clarke, Jr, was also killed in a WWII plane crash B-24E #42-7119 approximately one year before her death.