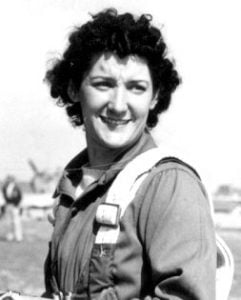 Pioneering pilot, Teresa James, was born on January 24, 1914, in Pittsburg, Pennsylvania and took flying lessons to surprise her brother. She soloed at age 19 and became the first female flight instructor to graduate from Buffalo Aeronautical Institute received her commercial transport license October 27, 1941, with over 600 hours.

She earned the money for her extra flying hours by flying as a stunt pilot at air shows around Pennsylvania, Ohio, and New York. “My specialty was doing a 26-turn spin two miles up and pull out at 1,000 feet.” She flew Airplane Stunting Exhibition for three years. As she said later in Jan Churchill’s On Wings to War, “Those were the days of undiluted heroics, but you were known; yet with all my flying time, I never believed I’d get to be a part of history.”

She married George “Dink” Martin, one of her flight students, in 1941. Dink enlisted in the Army Air Corps and became a flight instructor and bomber pilot. The couple had very little time together before he was sent overseas, she then learned he was missing in action. After a given amount of time, the Army declared him dead, but his disappearance was cloaked in mystery for several years. Teresa tells the rest of the story when in 1984 she attended the P-47 Thunderbolt Pilots’ reunion in Paris, France. She began to search through some of her old correspondence from the war. She found the name of the mayor of Joinvile-le-Pont, where Dink’s plane went down. Monsieur le Marie Guy Gibout (now the former mayor), in turn wrote to Roger Belbeoch, the President of the Veterans Association in that area, and both men asked her to come visit when she came to Paris for the reunion. She also wrote to Levone Agha-Zarian, a former RAF pilot who flew the P-47, and was now the President of the P-47 Thunderbolt Association and living in France. He also corresponded with Mayor Gibout and made a discovery.

He wrote to Teresa that, “there are people in Joinvile-le-Pont who saw your husband crash. Have spoken with authorities – they await your visit.” She also heard from Roger Belbeoch who wrote: “I can already tell you that I have found people who witnessed what happened.”

On Sunday, May 27, 1984, Belbeoch, his wife, and an interpreter picked up Teresa from her hotel in Paris and they all drove to Joinvile-le-Pont, some 45 minutes from Paris. They were met by the current mayor, Pierre Aubry, and a crowd of people.

I saw a plaque that said, ‘In Memory of George L. Martin.’ And there was a piece of the B-17 landing gear in the niche. After a welcoming speech, a caravan of cars drove out Avenue de Lille to the crash site.

We pulled up in front of the house that the wing had hit, The woman who had lived there during the war still lived there. She was in her 80s. Through an interpreter I talked to this dear lady who said she was in here house when the plane crashed. She described to me her feelings about the crash and how it was a miracle that the plane stayed in the middle of the narrow street.

A memorial plaque on the wrought-iron fence out front said “In Honor of the Nine Americans Who Gave Their Lives For Freedom, June 22, 1944.”

I was overcome with sadness. All I could think about was Dink’s last letter, which bore the same date, Then we walked over to the garage where two 17-year-old boys hid when they heard the air siren back in 1944. They heard the crash moments later, and when they peeked out the door, they saw the smoking wreckage and a body lying between the trees, The body was intact, They rushed him to the hospital, but he was already dead. The man was my husband. The neighbors ran into the street and gathered pieces of bodies before the Germans arrived. They were later taken to the Church for blessing, and then buried together.

Then Teresa was introduced to the two “boys”. They were in 1984, fifty-seven years old, but they still lived in Joinvile-le-Pont. Teresa later found out that all the activity involved with Dink’s crash had saved the Joinvile-le-Pont bridge from being blown up.

I just stood there and cried and cried. I felt like such a dope. But I could visualize Dink trying to get the B-17 down that narrow street between the houses, averting real tragedy as far as the townspeople were concerned. At last, I knew what really happened to my husband. May 27, 1984 was a day to remember, an incredible event that ended forty years of uncertainty.

Teresa James was born on January 27, 1914, in Pittsburgh, Pennsylvania. Her parents, Herbert and Catherine Agnes (Ryan) James owned the James Floral Shoppes in Pittsburgh and Wilkinsburg. She became the eighth of the Originals.

From WASP Betty Turner’s “Out of the Blue and Into History,” Teresa wrote: “…I received a telegram from General Arnold about a group of women pilots for domestic ferrying. I then had 2,254 flight hours.

I was sworn into the WAFS on October 6, 1942, I was the first WAFS pilot to fly a military plane coast-to-coast across the United States. It was in a PT-19. From the day of her first solo in 1933 until she stopped flying in the late 1980s, Teresa flew a total of 54 types of military and civilian airplanes – from the OX-5 Travelair to the twin-engine C-47 and C-60 and the powerful pursuits, P-47 and P-51. She checked herself out in the latter few minutes before taking off on a cross-country delivery.

She was commissioned a major in the U.S. Air Force in 1950, based on her 27 months of WAFS/WASP service, and served until her retirement in 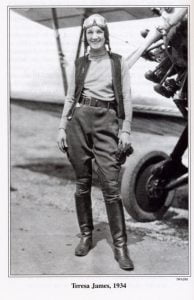 1976. Most of here Air Force work was done in and around her native Pittsburgh, but from 1961 to 1965 she was assigned to the 5040th Air Base Group, Elmendorf AFB, Alaskan Air Command, Anchorage. She worked on casualty assistance and received two commendations. While living in Alaska, she gained experience in bush flying on skis and floats.

Teresa initiated the fight for veteran status recognition for the WAFS and WASP in the early 1960s. “It was through my contact with Congresswoman Patsy Mink, of Hawaii, that she introduced the bill for legislation to gain recognition and veteran benefits for the WASP. I spent a lot of my own money trying to get us recognized before anyone else ever got into it.”

The WASP finally gained their recognition as Veterans when President Carter signed a bill into law in 1977.

In 1939, she joined the 99s, and in 1986 was honored by inclusion in the Forest of Friendship in Atchison, Kansas. She was a life member of the P-47 Thunderbolt Pilot Association, the Grasshoppers (Women Pilots of Florida), and the silver Wings Association. In 1979, Teresa was awarded a Pancho Barnes (pioneer woman flyer) trophy for active participation promoting activities in Silver Wings. On July 20, 1986, she was honored with a plaque and a tree planted in her names at Aviation’s International Forest of Friendship in Atchison, Kansas – birthplace of Amelia Earhart. In 1993, she was inducted into the OX-5 Hall of Fame. On October 15, 2000, she was inducted into the Hall of Valor – New Women’s Hall of Tribute in Pittsburgh. She donated her WAFS uniform to the National Air and Space Museum of The Smithsonian Museum in Washington, DC, where they are on display.

This pioneering, one-of-a-kind aviator, took her final flight on July 27, 2008, passing away quietly in Lake Worth, Florida. She was 94. Her ashes were carried back to Pennsylvania where her family still owns and operates their flower shop.