The many faces of Rosie the Riveter

Rosie the Riveter may be one the biggest female cultural icons of the 20th century, and still today. Hearing the name easily conjures up the image of a hardworking woman, with her hair tied up in a red scarf, pitching in to do her part in the factories and shipyards while the men were off fighting in WWII. The initiative sparked a social movement, bringing increased opportunities for women to work outside the home, and prove that a woman was capable of doing jobs traditionally held by men, and do them well!

What might be a little less obvious to see is the diverse community of women who filled this role. Women of all races and backgrounds joined the effort. “We Can Do It” was embraced by 6 million women from coast to coast, half of which worked in defense industry jobs.

Today we recognize the over 600,000 black women who entered into the American wartime workforce. Not only were women getting the opportunity to directly contribute to the economy and war effort, but black women were working alongside white women which helped to begin to destroy the social barriers of segregation, ignorance and injustice.

Despite immense adversity, women of color had been leaving their lasting footprint on history for decades. Just in aviation, three notable aviators live on in the history books and continue to inspire today. In 1921, Bessie Coleman was the first black woman to earn her pilot’s license, having to do so in France because she could not receive training or gain the licensure in the U.S., simply because she was black and a woman. In 1938, Willa Brown became the first black woman to earn a pilot’s license inside the U.S. And in 1941, Mildred Hemmons made history in Alabama as that state’s first black female pilot, even after facing one obstacle after another.

The Women Airforce Service Pilots (WASP), formalized in 1943, gave over 1,000 women with prior aviation experience the chance to fly military aircraft stateside, freeing up their male counterparts for service abroad. While a small handful of the women selected for the WASP program were non-white, black women were excluded, even from the application process, simply because of the era’s racial bias. That certainly did not stop women like Mildred Hemmons from pursuing their dreams.

But the times, they were a-changing. “Rosie” became a liberator for women of all colors, helping to lay the groundwork for the forthcoming civil rights movement of the 1960’s, just like the Tuskegee Airmen. Mother, grandmothers, aunts and sisters put on their work boots and treaded into new territory when they took on these jobs, while still managing the work at home. Like working moms today, these women balanced multiple roles, giving a country the “manpower” it needed to fight a war on a global scale, while keeping the home fires burning.

To the Rosies of every color, we salute you! 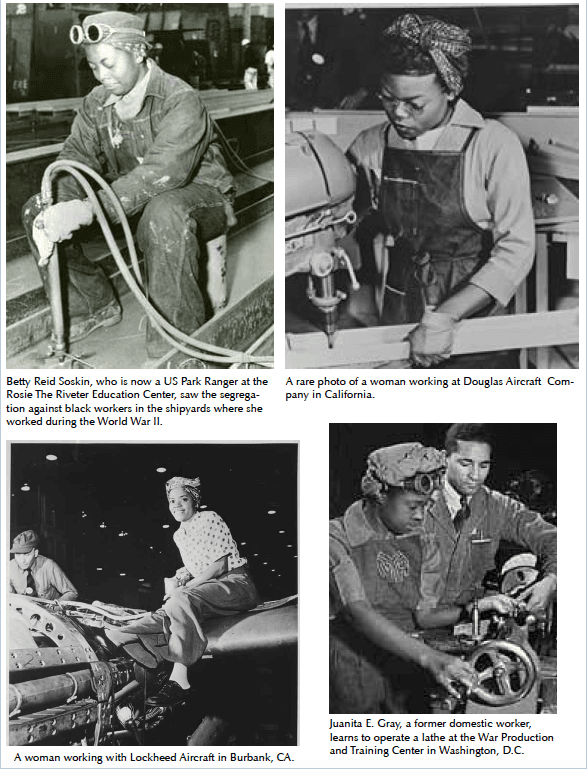