Theodore Johnson made a mark on history as a Tuskegee Airman, but he didn’t talk much about his experiences until later in life. “I said my dad was a man of few words, especially when it came to himself,” said his daughter, Muriel Johnson.

He was a man of few words, but his life spoke for itself.

Mr. Theodore Johnson was born March 22, 1924 and attended School Mobile from First Grade through High School graduating from Dunbar High School June 6, 1941.  He was inducted through selective service in 1943 and sent to Fort Benning, GA.  After three days of processing and classified as general service, he was sent home for 21 days in reserve status until new recruits could be accommodated.

Upon returning for active duty, he was sent to St. Louis, MO, Jefferson Barracks, for basic training.  After training, he was sent to a Replacement Depot at Fresno, CA followed by Tenopah, NV, and on to Camp Kilmer, NJ.

On Easter Sunday, April 1944, he was sent on a nine-day voyage to Europe and debarked at Glasgow, Scotland.  His group boarded a train to Bristol Area for three weeks and on to the Canterbury area.  At the end of July, he was sent to Omaha Beach on an LST (Landing Ship, Tank) journeying across France, Belgium, Holland, and Germany.

“When he would sit and talk, that’s when you listened, because he didn’t talk much about for a long time,” said his daughter, Muriel Johnson.

His service was a part of her father’s life she didn’t know much about.

“When I would try to talk to him about it, he would close up,” Johnson said.

He mostly kept his experiences to himself until he became part of the San Antonio chapter of Tuskegee Airmen.

“He started going to the events and everything started coming out,” Johnson said.

Her father broke out of his shell and began opening up to people about everything he’s been through.

Here are just a few examples of the honors and recognition Theodore received:

March 29, 2007, President George W. Bush collectively awarded the Tuskegee Airmen the Congressional Gold Medal. The Airmen received bronze replicas of the medal; the original gold medal is on display at the Smithsonian.

March 25, 2019 in San Antonio, TX Tuskegee Airmen James Bynum, Theodore Johnson, and Dr. Granville Coggs were recognized at a reception held by a local senior living facility hosted a reception to honor the Tuskegee Airmen on the Unit’s 78th Anniversary.

June 11, 2015 Tuskegee Airmen James Bynum, Theodore Johnson, and Dr. Gene Derricotte received an Honor Flight at Randolph A.F.B. TX in a T-1A Jayhawk flown by the 99th Flying Training Squadron, their planes are marked with “Tuskegee Airmen” on the sides and the traditional red tail the Airmen flew with during World War II.

All three men were awards certificates and coins commemorating the event, as well as a keepsake jar of dirt from Tuskegee, Alabama where they were first trained. 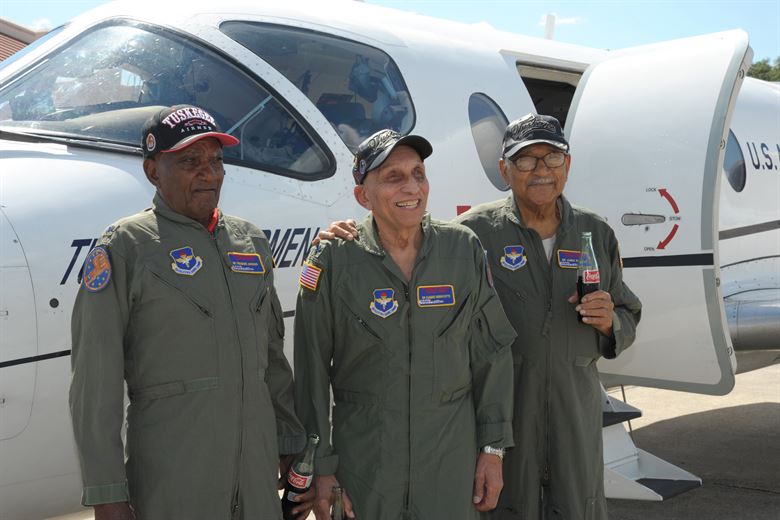