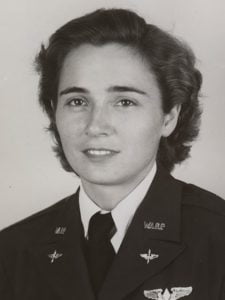 Velta was born in Vienna, Virginia, where she grew up with a love of aviation.

When she learned of America’s desperate need for military pilots, and the Army Air Forces’  recently enacted  training program to teach women pilots to fly military aircraft ‘the Army way,’ she applied for the program. She was one of ninety-eight women pilots from all over America who was accepted as a member of class 44-7 and reported for training to Avenger Field in Sweetwater, Texas.

After 7 months of the Army Air Forces’ flight training, she graduated with fifty-eight of her classmates on 8 September 1944.

Velta was then stationed at Merced Army Air Field in California.  There she flew At-6s as an administrative pilot, flying personnel from one base to another, as well as flying BT-13s on observation flights and as an instrument instructor, teaching AAF male pilots how to fly by instruments alone.  She remained there until the WASP were disbanded on 20 December, 1944. 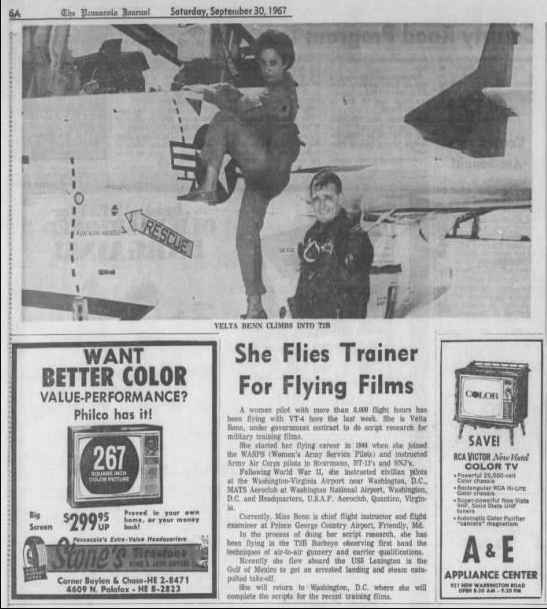 carriers for the Navy, and was an FAA accident prevention counselor.  In addition, she was an FAA pilot examiner for private, commercial, multi-engine and instrument ratings, with over 27,000 flight hours to her credit.

In 1983, Velta Benn was inducted into the Virginia Aviation Hall of Fame, and on March 10, 2010, she, together with 1,101 WASP peers, was awarded the Congressional Gold Medal, the highest honor  Congress can give a civilian.

On December 1, 2010, Velta passed away at her residence in Alexandria, Virginia, less than 20 miles from where she grew up and learned to fly. She was ninety-three years old.

This special WASP leaves a unique aviation legacy, as is evidenced by the following selected postings:

MESSAGES TO VELTA:
“I had the honor to share an airplane cockpit with you on seven FAA checkrides and on each one of them it truly was a pleasure to fly with and learn from you. That’s right – one of the most important things I learned from you was how to remain calm, cool and collected in a cockpit under adversity. I sometimes would ask myself during a flight, “What would Velta do in this situation?  “ You taught more with fewer words than anyone I have ever known and that is an admirable trait. You were a class act and set an unwavering example for all who were fortunate enough to come across your path in life. Simply put, your sphere of influence was quite large. And although I know that YOU would never say it – you were one of the greatest of the ‘Greatest Generation’.   First Lieutenant, we all are truly going to miss you!”  Matthew Tyson   Louisa, VA

“It was an honor and pleasure to know her and learn from her. Her life’s accomplishments are what many dream of and few ever achieve.”  Dr. Tom Roselle   Oakton, VA

God bless her family and those whose lives she touched.  She is truly flying higher.