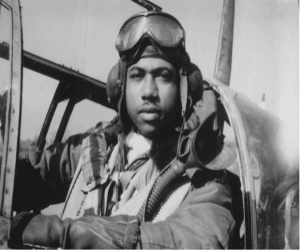 Vernon Haywood was born in Raleigh, North Carolina on October 24, 1920. He is the youngest of seven children. His father worked for the railroad as a brakeman while his mother stayed home and took care of the children. He grew up in Raleigh and completed high school there in segregated facilities. Segregation and discrimination were common in Raleigh. Col. Haywood said that “segregation was the law of the land.”

Haywood was interested in airplanes from an early age. He recalls one incident that is still vivid in his memory, “We were out playing one night when an airship — it was called a dirigible at the time — a giant airship came over. It was really spectacular because none of us had ever seen anything like that! It was flying quite low and it was lit up quite spectacularly. It looked like a big lighted sausage up there with windows in it. It was really fascinating and I think from that moment on I sort of got the bug.”

Haywood graduated from high school in 1938 and then attended the historical Black college, Hampton Institute (now Hampton University) in Virginia. In the late 1930s, the federal government established the Civilian Pilot Training Program at Hampton and six other black colleges. Haywood enrolled in the program and took flying lessons in addition to his college courses. In 1941 Haywood went to Tuskegee Army Air Field for fighter pilot training. Only the top students were selected for this additional training. At the end of training, Haywood chose to pursue a military career with the Army Air Corps. In April 1943, Haywood graduated as a second lieutenant and received his silver wings. Only two classes had graduated prior to his enrollment in the program. Lt. Haywood became one of the famous “Tuskegee Airmen”.

Lt. Haywood was assigned to the 332nd Fighter Group, an all-Black unit at Selfridge Field in Michigan. Just before Christmas in 1943 they were shipped to Italy to help fight World War II. In Italy, his unit joined other Black squadrons: the original 99th Pursuit Squadron from Tuskegee, the 100th, 301st, and 302nd. The latter three squadrons made up the 332nd Fighter Group commanded by General Benjamin O Davis, Jr.

He then served fifteen months as an Army Air Corps fighter pilot in the Mediterranean. He flew P-39s, P-41s, and P-51s on missions escorting B-17 and B-24 bombers to their targets. Haywood rose through the ranks and was made commander of the 302nd Fighter Squadron. He flew 356 combat hours in 70 missions before returning to the states in 1945.

After President Harry S. Truman issued Executive Order 9981 integrating the military, Col Haywood became one of the first African American aviation instructors in the armed forces. Assigned to Williams AFB, Arizona in 1949, he was one of the first four black jet flight instructors in the U.S. Air Force where he taught for four years. After several tours of duty in the Far East, he returned to Arizona in 1966. There he commanded the 4454th Fighter Squadron, flying F-4 phantom jets. By serving so effectively as an instructor, then flight and section commander, he helped certify the goal of total integration in the armed forces. And the exemplary performance of Haywood and his colleagues also did much to advance civil rights and topple other racial barriers throughout all America. A highly decorated and respected leader, he continued his illustrious USAF career until retiring a Colonel in 1971.

In October 1971 Colonel Haywood retired after flying more than 6,000 hours in fighter airplanes. As an active member of the Tuskegee Airmen in Tucson, Arizona, he spoke to civic and school groups about his experiences. Vernon Haywood died in April 2003.