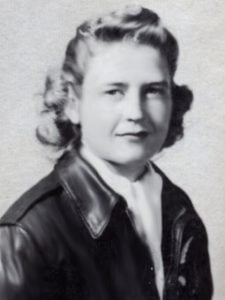 Virginia Hill was born on October 24, 1917 in Moro, Oregon. She grew up in rural Washington, spending time at the family’s cabin on Lake Chelan and at the experimental farm where her father worked.  Always called Ginny, she rode horses, skied, hiked and went river rafting. She took her first plane ride at age 4, sitting in her father’s lap as they flew with a barnstorming pilot. She fell in love with flying and followed the national news reports of Charles Lindbergh and Amelia Earhart.

In 1938 she dropped out of Washington State University to bicycle through Europe for a year before resuming her studies at the University of Washington. Eager to learn to fly, she joined the Civilian Pilot Training Service in 1940-41.

When she heard about the WASP training program, she applied, and was accepted into the fourth class of WASP (43-W-4), and reported to Houston, Texas for training. Class 43-W-4 was the largest class of WASP trainees, with 151 young women pilots enrolled.  Shortly after her class arrived, all of the flying training was moved from Houston to Avenger Field in Sweetwater, Texas.

After the WASP were deactivated, she instructed on seaplanes on Lake Washington, Seattle.  On Jan 1, 1947, Ginny and WASP Celiea Hunter ferried two surplus military planes from Seattle to Alaska.  When the temperature dropped to sixty below zero, there were no return flights to Seattle and the two WASP stayed in Alaska.

Ginny worked for Chuck West’s Alaskan tour business and flew tourists to Kotzebue for Wien Airlines.  In 1948, Ginny and Celia spent a semester in Sweden as exchange students and bicycled around Europe.  They returned to Alaska and in 1950, Ginny married Morton “Woody” Wood, who she met on the Birch Hill ski slope.  In the summer of 1951, Woody’s job as park ranger took the young couple to Katmai National Monument where they explored the country and enjoyed the rich recreational opportunities.

In 1952, Ginny and Woody, along with Celia Hunter, founded Camp Denali, one of Alaska’s first eco-tourism lodges.  For the next twenty-five years, Ginny spent every summer at Denali National Park, leading backcountry hiking trips.

Later called one of the matriarchs of Alaska conservation, Ginny spent the next forty years fighting to protect the wild places and wildlife of Alaska.  Her causes included wolf bounty, Project Chariot, Rampart Dam, the trans-Alaska oil pipeline, Alaska National Interest Lands Conservation Act and protecting the Artic National Wildlife Refuge from oil development.  She helped start the Alaska Conservation society, the state’s first environmental organization and her column, “From the Woodpile,” was published in the Northern Alaska Environmental Center’s newsletter for twenty-three years.

Her selfless work in the field of conservation was recognized not only by her peers, but by national organizations, including The John Muir Award (The Sierra Club’s highest honor),  The Alaska Conservation Foundation  first ever Lifetime Achieve Award (to Ginny and Celia Hunter),  the Florence Collins Award for her lifetime contribution to the environment of the interior and Artic Alaska, and US Fish & Wildlife Service’s Citizen’s Award.

In 2010, Ginny and her sister WASP were awarded the Congressional Gold Medal, the highest civilian award Congress can bestow, for their pioneering military service flying for the Army Air Forces during World War II.   In 2011, she was inducted into the Alaska Women’s Hall of Fame (Class of 2010).

In 2012, “Boots, Bikes and Bombers” was published as an intimate biography of Ginny Hill Wood, edited by friend Karen Brewster. 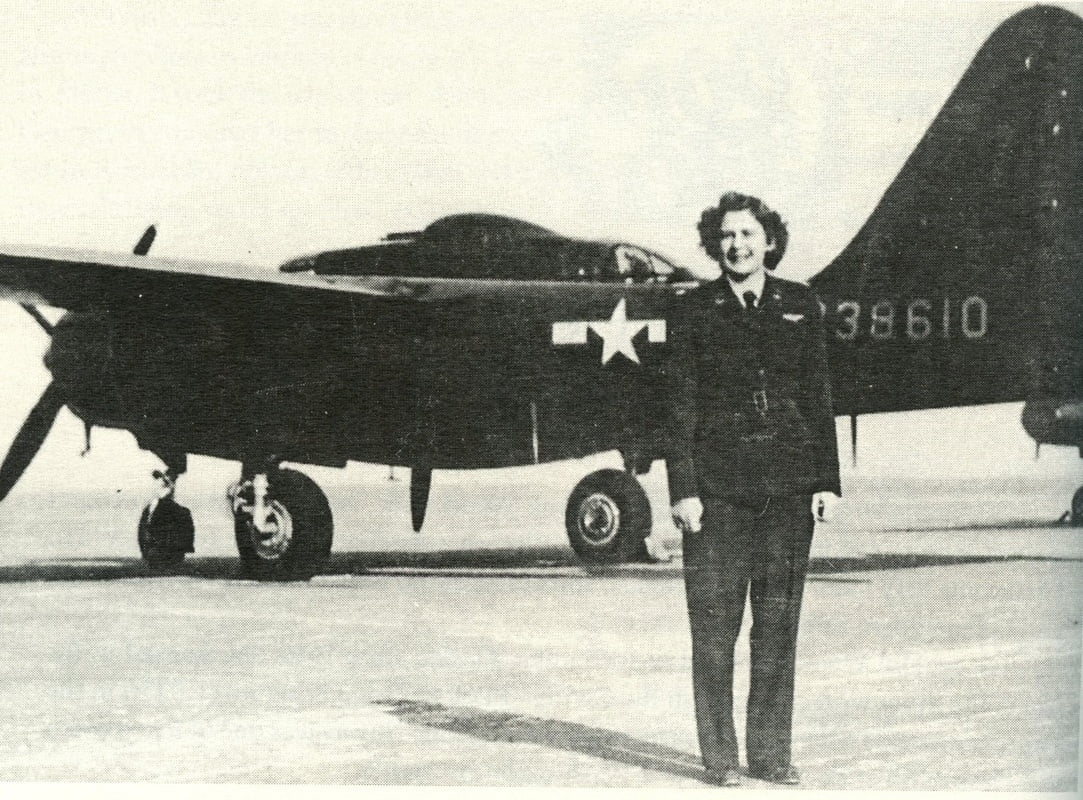 Ginny Wood, wearing her WASP uniform, walking away from the P-61 Black Widow after a flight near the end of World War II. Alaska Aviation Heritage Museum, Anchorage, Alaska. Photograph, caption, and information from Women Pilots of Alaska by Sandi Sumner (2005) and Boots, Bikes, and Bombers: Adventures of Alaska Conservationist Ginny Hill Wood by Karen Brewster (2012).