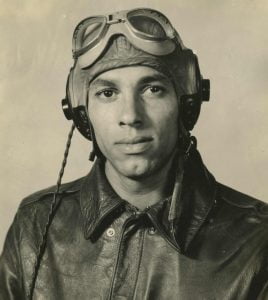 Walter Gilbert Alexander II was born in 1922 in Petersburg, Virginia. He was born into a family with multiple generations of doctors who migrated from Virginia to New Jersey following a chain migration pattern. Alexander was named for his great uncle, Walter Gilbert Alexander—a Virginia-born physician and politician who settled in Orange, New Jersey, and became the first African American elected to the New Jersey state legislature in 1920. Alexander’s father was a dentist who decided to relocate to New Jersey to join other members of the family; he was active with the NAACP. His mother attended Fisk University and worked as a social worker for the City of Orange.

In 1943, Alexander became the first African American student to graduate from the Rutgers School of Engineering. After graduation, he first went to Los Angeles for an engineering job with Douglas Aircraft and then decided to enlist in the war effort.

As a young man during World War II, Walter G. Alexander II was training to become an aviation cadet at the Tuskegee Institute in Alabama. From the flight line, he was watching the other cadets take off during their training. The irony was that before he arrived at Tuskegee, Alexander had never been on a plane in his life. Fortunately, an instructor pilot at the base offered Alexander a ride in the air.

“It was exhilarating,” he says now of his first flight during an interview. “Mostly it was flying around, demonstrating different things. [The instructor] got me really excited when he did aerobatics to show me what it was like, because it was something I was going to in the course of training have to learn how to do.”

Alexander’s interest in aviation began as a youngster when he used to build model airplanes in his hometown of Orange. On a scholarship at Rutgers he studied mechanical engineering and graduated in 1943. (He was the first African American to graduate from the university’s College of Engineering, according to Rutgers’ alumni association). Alexander then moved to Los Angeles to work as an engineer for Douglas Aircraft.

A few years earlier in 1940, the Selective Training and Service Act allowed African American men to serve in the Air Corps, according to a history of the Airmen on the National Museum of the Air Force Web site. For Alexander, an opportunity came up for men to serve as aviation cadets in the Corps by taking a physical without having to be in the army.

“A number of us who were working at Douglas at the time had draft deferments, [and] were not required to register for the service any further. [We] decided to take the exam to see if we could qualify, and passed.”

Alexander first went to Fort McArthur in California and then to Mississippi, where he took his physical and passed the exams to become a cadet. Afterwards he embarked on the next phase of his training in Tuskegee, Ala. According to Tuskegee University’s Web site, the institution was chosen as the site because it already had a pilot training program and an airfield.

“When I got to Tuskegee,” he said, “I found I was in a group of what we call PAC—pre-aviation cadets—because it was more candidates for the course than they could accommodate. We were stationed there to wait for our training to start, which took about six months.”

While at Tuskegee, the young cadet experienced two different worlds: life at the base, and the segregation outside that was the norm in the South. He was already prepared for that treatment, since his uncle was a physician at the local veteran’s hospital there. “The atmosphere among the African American residents of Tuskegee was welcoming. The other part was questionable or negative. I had been in that area before I steered clear of any indication of trouble.”

He completed pilot training at Tuskegee just as World War II was coming to an end in 1945. He was commissioned as a second lieutenant with the Army Air Force, but did not fly a combat mission. After his discharge from the military, he struggled to find an engineering job in the swollen post-war job market in a profession that only offered African Americans very limited opportunities.

Alexander then decided to fulfill his father’s long-held hope of carrying on the family legacy in medicine. He went to dental school at Howard University and graduated in 1952 with a doctorate in dental surgery. He returned to New Jersey to practice dentistry. Twenty years later he once again added another “first” to his list: this time becoming the first African American to serve on the New Jersey State Board of Dentistry from 1972 to 1977. He continued practicing dentistry until 2007.