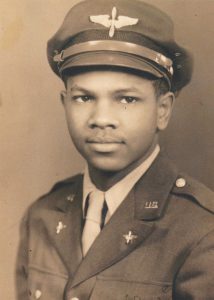 Born in North Carolina on Sept. 29, 1925, Johnson was the fourth of Lilly and Ellis Johnson’s nine children. His family moved north when he was 4 to escape racism in the south, settling in Glen Cove, New York in 1929.

While tending his parents garden, Mr. Johnson would look up and see planes from Mitchell Field as they flew over. He knew there were no Black Pilots flying those planes and he resented that fact. He made it his mission to qualify for the Air Corps. After graduating with honors from Glen Cove High School, Mr. Johnson was accepted into the Flight Training Program and arrived at Tuskegee Army Air Field (TAAF) on June 6, 1944, D-Day, to begin Pilot Training. He was a member of the Tuskegee Airman Class of 45-I. Mr. Johnson stated “The first thing I did when I arrived at TAAF was to go to the flight line and watch those Black Pilots fly over. An all-Black unit, we were all together. I wanted to see America become American—America the Beautiful”.

Below are some statements from Mr. Johnson about his military experience: “The Tuskegee experience was wonderful but what was even more important was getting the chance to fight for America just like everybody else. The Tuskegee Airmen had a very positive effect on this country. It’s something that young people should know. It is important to know where we came from. We never knew the positive impact we would have on this country. What I knew was that I wanted to fly and they were telling us that Black People could not fly.”

As much as Johnson enjoyed flying, he would never forget the racism he experienced in training. He trained in Nebraska, Colorado, Mississippi and Alabama, and racism was everywhere, inside and outside the Army bases. The armed forces were not integrated until 1948, so Johnson and his fellow airmen lived in separate barracks and rode in separate train cars. White soldiers did not even salute their Black counterparts.

After he left the service, Johnson attended several colleges while deciding what he wanted to do for a living. He worked in construction at first before joining Grumman Aerospace, where he eventually became a supervisor.

He also attended functions at the Lincoln House, where Black Glen Covers often met for a variety of events. There he met Elise Willis, and they married in 1948. They had three children — Michele, in 1953, Terry, in 1954 and William Ronald, in 1955 — and six grandchildren.

Terry, now Terry Finney, said that Joe was a great father, strict but fair, who offered his family constant love and encouragement. He frequently took them to museums, to upstate orchards to pick apples and to the 1964 World’s Fair in Queens. Education was paramount to her father, Finney said. He wanted everyone around him, regardless of race, gender, creed or financial status, to have a shot at succeeding.

No matter where he went, Finney said, being a Tuskegee Airman was always important to him. “It made him proud,” she said. “It made him know that African-Americans, despite the hardships they went through, made it and proved that they can do the same thing that everyone else could do so long as they tried and applied themselves.”

Mr. Johnson also proudly volunteered through the Claude B. Govan Chapter of Tuskegee Airmen, Inc., introducing and encouraging young people to take up a career in aviation or science. The chapter provides annual scholarships and awards to deserving individuals, groups and corporations whose deeds lend support to the organization.

In 2007, Mr. Johnson was honored as a former Tuskegee Airman by the City of Glen Cove, and in 2010, he was presented with a flag at a “thank you” breakfast held by Suffolk County Executive Steve Levy. He received an Honorary PhD from Tuskegee University in 2006, and a Presidential Accommodation and Medallion from A&M University. One of his cherished honors is the prestigious Congressional Gold Medal, received in March 2007.

Glen Cover Fred Nielsen, a Marine Corps veteran and the Herald’s 2020 Person of the Year, said that Johnson was a conduit to Black history and Black pride. One of Nielsen’s favorite memories of Johnson was when he was honored at a 2016 gala hosted by Heroes Among Us, an organization dedicated to helping veterans. Nielsen presented Johnson with a Boy Scout knot board, and when he came up to receive it, he asked to speak, surprising Nielsen aback.

Johnson leaned on his cane, and then sat down and told the crowd of 350 people about his life, in which he had seen so much that was painful for the Black community. His story enthralled the audience, Nielsen said. “There was no bitterness, there was no anger, in spite of what he had seen and experienced,” Nielsen said. “Everyone just attended him.”

Virginia Cervasio, the founder of Heroes Among Us, said Johnson was as humble as they come. He did not consider himself a hero, and was instead just proud to have served his country as an Airman.

Nielsen recalled asking Johnson sometime later how he couldn’t be angry given all he had experienced. Johnson gave Nielsen a half smile and said that in his lifetime, he had known many Black men and women who were raised by slaves and their descendants. As he grew up, however, he saw more and more Black people take on roles in American society that he never thought possible, culminating in the inauguration of President Barack Obama.

“People will miss him for the dignity of his thought and the dignity of his living,” Nielsen said of Johnson. “He didn’t seek to be an example for anyone, but his life, as he lived it, his words, as he shared them, were certainly inspirational.”

Toward the end of his life, Johnson was approached by hobby pilots who learned about him and the Tuskegee Airmen. They invited him to fly a plane on the same route from Mitchel Air Force Base, in Garden City, over his Glen Cove neighborhood, that he had watched countless planes fly as a child.

Johnson accepted, and had the chance to fly one last time, soaring over the spot where he once thought it would never be possible.