Upon turning 16, Bill applied for a job with the Federal Government and went to work with his father at the U.S. Patent Office as a Copy Puller. The next year, he was promoted to Library Assistant in the Scientific Library, where he worked until volunteering for the U.S. Army Air Corps Reserves on February 1, 1944. On May 16, 1944, he was inducted into the Army Air Corps at Camp Lee in Petersburg, VA. After completing Basic Training at Keesler Field, MS, he was assigned to Tuskegee Army Air Field in July, 1944 as a Pre-Aviation Cadet.

In May of 1945, he was placed in Class 45-I-SE for training as a single engine pilot, which included 10 weeks of Pre-flight Training, 10 weeks of Primary Flying, 10 weeks of Basic Flying, and 10 weeks of Advanced Flying. After completing three-fourths of his total Flying Training, WWII ended. All aviation cadets were declared “surplus,” and given the choice of remaining in the service or of being discharged. Bill chose to be discharged from Andrews Army Air Base as an Aviation Cadet on November 8, 1945.

In 1946, he returned to work in the Scientific Library of the U.S. Patent Office, later resigning to enroll in the Armstrong Veterans High School to complete his high school requirements. After completing high school, he enrolled at Howard University’s School of Engineering and Architecture in the fall of 1946, intending to become a civil engineer. While at Howard University, he met and later married Camilla H. Bradford on June 18, 1949.

In the summer of 1948, Bill began a long association with the U.S. Coast and Geodetic Survey as a Cartographic Draftsman of aeronautical charts. After three years, he was promoted to Cartographer, where he maintained an assigned group of facility charts for the southeast section of the United States. As part of his duties in this position, corrections, additions, and revisions to the aeronautical radio aids data were performed monthly.

In 1956, Bill’s wife encouraged him to complete his college studies, so he did. In June, 1960, he received his Bachelor of Science degree in Civil Engineering from Howard University. In 1961, he became the first Black Civil Engineer hired by the National Capital Transportation Agency (NCTA), the agency responsible for preparing the November 1962 report for President Lyndon B. Johnson on the feasibility of a 100-mile rail transportation system for the Washington Metropolitan Area. This Authorized Regional System is now known as METRO.

In 1961, Fauntroy became the first African American civil engineer hired by the National Capital Transportation Authority (NCTA), predecessor to the Washington Metropolitan Area Transportation Authority (WMATA). After NCTA was abolished and WMATA established, Mr. Fauntroy was promoted to urban planner for the portion of the subway system built in the District of Columbia. He retired from WMATA in November of 1984.

During a 2012 visit to the Army National Guard at Fort Belvoir, VA Mr. Fauntroy was invited Tuesday to speak to Soldiers and family members of the Operational Support Airlift Agency, a National Guard activity that is responsible for the flight standards of all Army component fixed-wing aircraft

Fauntroy’s experience with the Tuskegee Airmen, as he tells it, began in July of 1944 after he qualified and passed a battery of tests that certified him to enter the Army Air Corps as a pre-aviation cadet at Tuskegee Army Air Field.

“It wasn’t until May of 1945, that I went into training to become a pilot, but in the meantime, I did a lot of things that made me proud, made me angry, and made me thankful.”

One moment of pride, he said, was when he was asked to teach a sergeant – a superordinate – how to write and spell his own name. “That job was one of the greatest accomplishments of my life,” Fauntroy said, who at the time had not completed high school.

Fauntroy was eventually placed into class 45-I, and his training began with 10-weeks of pre-flight training – learning how to identify different aircraft, radio codes, and different types of weather. For Fauntroy, what stands out most about his training during those first 10 weeks were his experiences he had with the “upper classmen.”

“They couldn’t touch you, but they could wake you up in the middle of the night and have you do whatever they wanted you to do,” he said. “What they had you do wasn’t meant to be malicious though, it was meant to teach you that no matter what, there is always going to be someone above you telling you what to do.”

Another hard lesson learned for Fauntroy came while he was learning how to engage other aircraft in mid-air combat.

“A buddy of mine, who had come back from overseas, taught me how to dogfight,” he said.

Fauntroy said when he took this knowledge with him into the air the next day, “I put my nose onto [my flight instructor’s] canopy and he did a lot of things and I wouldn’t let him go. He finally did a roll and when he came out of the roll, I was sitting on him.

“I got cocky and picked up my microphone and said ‘ye-te-te-te-te-te, gotcha!’ Not only did he hear it, but everybody in the air did too, and when I got back to the base they had me in the ready-room for about half an hour – making me do pushups and everything they could, all while I had on my parachute.”

According to Fauntroy, class 45-I finished their basic flying training shortly after the Japanese surrendered, “so we were considered surplus and given the choice of either getting out, or finishing our training.”

This is where Fauntroy, who refers to himself as “little Willy,” saw his time end with the Tuskegee Airmen – who later came to be known as the Red Tails – but his aviation spirit continues on. 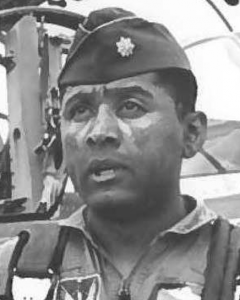