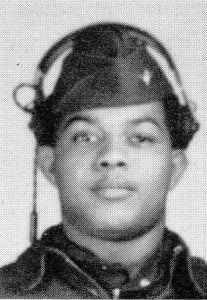 “Someone asked me once what it was like to fly in combat. I said, ‘Well, it could be seven or eight hours of complete boredom and thirty to forty seconds of sheer bedlam.’”
~Tuskegee Airman Lt. Wilson V. Eagleson II

Lt. Wilson V. Eagleson II’s military career spanned three decades and three wars until his retirement from the US Air Force in 1972.Born on February 1, 1920, Wilson Vash Eagleson II grew up in Bloomington, Indiana. As a child, he suffered with rheumatic fever and needed a moderate climate, so he and his sister had to live with his grandmother in Bloomington after his parents were offered jobs at North Carolina Central College (now University). His father was the first football, basketball, and baseball coach at the Durham college. His mother was a registrar at the same institution for about forty-eight years. “I grew up Bloomington, Indiana, and I lived there until my father was killed in a car wreck when I was thirteen years old. But the year before that, he took me to the fair, and I got to ride in an aircraft—one of the old two-seater barnstormers. And from then on, the only thing that I really wanted to do was fly.” Eagleson moved to Durham in 1934, after his father’s death. He said that the mascot for the college was named after his father. Eagleson notes, “They’re called the Eagles. And there’s a dormitory on the campus that’s been named for my mother. So I grew up basically in a college atmosphere as a youngster. And we were on one side of town, and we basically stayed there.”

After he graduated from high school in Henderson, he went to West Virginia State College, where he became a member of the Civilian Pilot Training program in 1938. “Of course, the first thing that I did was volunteer for the air force. And we were of course told then that [they’re] not taking colored, as we were called then, into the air force. So I continued in school, coming back to Indiana University and spending a year there. And I went into service on January 19, 1942. But I went into the infantry. And I spent two tours at a little base called Fort Walters, Texas: one as a trainee, and one as a cadre, training the new bunch of men behind me. From there I went to Fort Benning, Georgia, to Officer Training School.” One day the commander there told Eagleson to pack his bags, as he was going to Tuskegee to learn to fly. He had applied for the flight program at Tuskegee Army Air Field, and he had been accepted in September 1942.  Eagleson graduated from the training at Tuskegee and was commissioned on April 29, 1943.  He got married on May 1, 1943, and left for war in September 1943.

He soon deployed to North Africa with the 99th Fighter Squadron. The squadron moved to Italy in July, and remained in that country for the rest of the war.

During an afternoon patrol over Anzio, Italy, on Jan. 27, 1944, the 99th Fighter Squadron came across several German planes. When a Focke-Wulf 190 slipped behind 1st Lt. Erwin B. Lawrence Jr., Eagleson cut across their path and fired on the FW-190.

“It was about my fifth mission,” Eagleson later said in an interview that was published in “The Tuskegee Airmen: The Men Who Changed a Nation” by Charles E. Francis and Adolph Caso. “It was to Anzio Beachhead. At that time, the 99th was attached to the 79th Fighter Group. For over a period of nine months, the squadron had been on strafing duty, but had never encountered enemy aircraft. Each day it seemed that the Germans would bomb between missions. That is, as soon as the 99th would leave an area, the Germans would come in and bomb.

“On this particular mission, we were late arriving over the target. We arrive in time, however, to observe the Germans making their run to bomb. We were flying P-40s and realized that we could not head off the Germans who were flying much faster planes. We decided to stay up about 10,000 feet and wait until the Germans finished bombing, then as they pulled up out of their dives we pounced on them.

“This we did, and when the time came for us to make our attack I followed Capt. Lawrence. However, Capt. Lawrence was so eager to make the kill, he overshot the aircraft he selected to attack. The enemy fell in behind Lawrence and opened fire on him. But while the enemy pilot was busy trying to shoot Capt. Lawrence down, I pulled up behind him and began to fire. After a few bursts, the enemy plane began to smoke. A few more bursts caused it to fall off and head down to the ground. I followed the falling plane and continued to fire on it until it was hardly 100 feet above the ground.”

Eagleson collected his second kill a week later. On Feb. 7, FW-190s were spotted during another patrol mission over the Anzio area.

“I was patrolling over the beachhead in a formation of eight P-40s. The mission had been uneventful for 45 minutes, then it happened,” 2nd Lt. Leonard M. Jackson said in an interview Francis included in his book. “Sixteen FW-190s came over to dive-bomb Anzio Harbor. The enemy was sighted and called in by our ground control. We saw the enemy planes as our flight passed heading south.”

Eagleson, Jackson and 1st Lt. Clinton B. Mills were each credited with one kill.

By July, the 99th Fighter Squadron was attached to the 332nd Fighter Group, joining three other black squadrons, and based at Ramitelli Air Field, Italy.

On Aug. 15, escort missions took 64 P-51 Mustangs to southern France when Eagleson’s plane was hit by anti-aircraft fire, Chris Bucholtz reported in “The Tuskegee Airmen: The Men Who Changed a Nation.” Eagleson’s engine began to lose coolant, and he was forced to parachute from the plane. By the time he had walked half a mile to a nearby road, a squad of American troops who saw Eagleson jump was waiting for him and gave him a ride back to Ramitelli.

At the end of the war in 1945, Eagleson had completed 350 missions and been injured twice. After the war, he returned to Alabama and helped close the Tuskegee training program. He left the military for two years before re-enlisting and becoming a flight mechanic in the U.S. Air Force. He served in the Korean War and the Vietnam War. 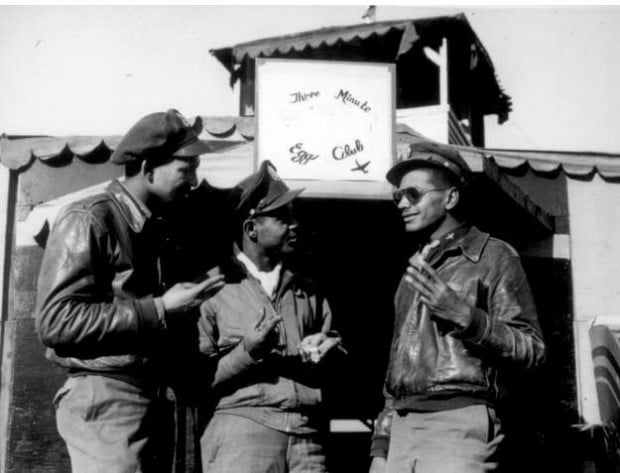 In the early 1950s, Eagleson was on a cargo plane over Indochina when anti-aircraft fire hit the plane, wounding the pilots. Eagleson took the controls and flew the plane back to the Philippines; he was later awarded the Distinguished Flying Cross. Eagleson retired again in 1972.

After retiring, Eagleson raised horses and golden retrievers on his farm in New York. He later moved to Goldsboro, N.C., and worked in the men’s clothing department at Belk. He visited schools across the nation, telling students about the Tuskegee Airmen. In 2000, the Goldsboro chapter of Tuskegee Airmen Inc. was founded and named for Eagleson.

Eagleson died on April 16, 2006, in Goldsboro, N.C., and is buried at Markham Memorial Gardens in Chapel Hill, N.C. During his career, he was awarded the Distinguished Flying Cross, two Purple Hearts, three Presidential Unit Citations, the Red Star of Yugoslavia, the Korean Service Medal, the Vietnam Service and Campaign Medals, as well as numerous other awards and decorations. Some of his memorabilia is on display at the Smithsonian Institution.