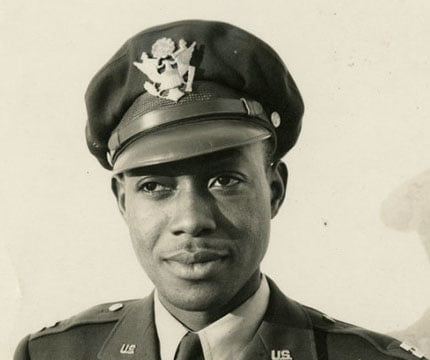 Woodrow Wilson Crockett was born on August 31, 1918, in Homan (Miller County). Nicknamed “Woody” as a child, he was the fifth of six children born to school teachers William Crockett and Lucindan Crockett. He grew up in Texarkana (Miller County) and then lived with his sister in Little Rock (Pulaski County) in order to attend Dunbar High School. After graduating from Dunbar High in 1939, he spent some time at Dunbar Junior College where he aspired to be a mathematician. But in 1940, when he could no longer afford the community college tuition in Little Rock, he decided to join the military.

He enlisted in one of the first black units, the 349th Field Artillery Regiment, the first African-American field artillery unit in the regular army. Living as a private on a salary of $21 a month, he soon was drawn to a recruitment poster that read: “Be a pilot, bombardier, navigator and earn $245 per month.”

“It didn’t take too much math to figure that one out,” he told The Washington Post in 2003. “So I went for it.

Crockett transferred to the Tuskegee Institute in August 1942, becoming an aviation cadet. After graduation, he was commissioned as a second lieutenant on March 25, 1943, in class 43C, the twelfth class at Tuskegee Army Air Field. Crockett was the second Arkansas fighter pilot to graduate from the program for cadets. He served in the 100th Fighter Squadron and the 332nd Fighter Group. While stationed in Italy between 1944 and 1945, he flew 149 combat missions in fifteen months. As a member of the Twenty-fifth Air Division, Crockett was stationed at various U.S. Air Force bases. 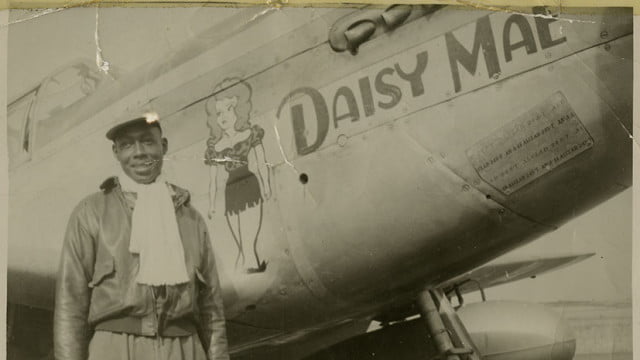 During the Korean conflict, Major Crockett completed forty-five missions, receiving numerous awards and accolades. During his military career, Crockett served at various times as a radiological safety officer, flying safety officer, and squadron commander. He was a member of a B-17 crew and was airborne during atomic bomb tests in the Marshall Islands.

In 1958, Crockett was the assistant test director for the F-106 Category II Test Program at Edwards Air Force Base in California. On June 2, 1959, Crockett gained some acclaim when he became a member of a select group of early pilots to fly at Mach 2 speeds. For a brief period, he was assigned to the North Atlantic Treaty Organization (NATO) in Oslo, Norway.

After nearly three decades of military service, Crockett retired in 1970 with more than 5,000 hours of flight time and 520 combat hours. Crockett was a graduate of the U.S. Air Force Command and Staff College. During his military service, he received many awards, including the Distinguished Flying Cross, the Presidential Unit Citation, and two soldier’s medals for bravery for extricating pilots from their burning fighter aircraft in 1944 in Italy and in 1953 in Korea. Crockett also received the Air Medal with four oak leaf clusters, the Meritorious Service Medal, the Army Commendation Medal, and the Air Force Commendation Medal with one oak leaf cluster. He retired with the rank of lieutenant colonel.

In 1992, Crockett became the first African American elected to the Arkansas Aviation Hall of Fame. In 1994, Crockett traveled to Europe with President Bill Clinton during events surrounding the fiftieth anniversary of the D-Day invasion during World War II, visiting the Wall of Missing Airmen at the Cambridge American Cemetery and Memorial in England.

Crockett was inducted into the Arkansas Black Hall of Fame in 1995 and, in 2001, was awarded an honorary doctorate degree from the University of Arkansas at Little Rock. He lived for many years in Annandale, Virginia, becoming an avid tennis player after retirement. Crockett’s wife, Daisy Juanita McMurray Crockett, with whom he had three daughters and a son, died in 2000. In his last years, Crockett suffered from Alzheimer’s disease. He died on August 16, 2012, at the Knollwood military retirement community in Washington DC. He was buried with honors at Arlington National Cemetery. His World War II flight suit is a part of the collection of the National Museum of African American History and Culture in Washington DC.