With parachute in tow, Lillian Yonally prepares for another flight. She logged more than 1,000 hours while serving with the WASP

Excerpt from an interview with Julia Lauria-Blum, featured in the “Metropolitan Airport News”, January 2022

Lillian Lorraine was born on May 5, 1922 in Lynn, Massachusetts. The oldest of two daughters, she lived with her father and grandparents in New Bedford, Massachusetts until age 14. Her summers were spent at the beach with her mother and younger sister in Halifax, Canada. Boating, sailing, and swimming were favorite activities, but Lillian’s eyes turned skyward after she had the chance to sit up front at the controls of an airplane that her aunt and uncle were piloting to New York. At age 15, she began to learn how to fly in Piper Cubs at an airport in Rochester, Massachusetts. After four years of boarding school, Lillian moved to New York City where she attended the Katharine Gibbs Secretarial School while taking flying lessons on Long Island. She earned her private pilot’s license at Roosevelt Field in September 1941. After graduating from Katharine Gibbs, Lillian worked briefly for Pan Am and then Grumman Aviation Engineering in Bethpage. During this time, Lillian worked as an air control operator at Grumman, sometimes assisting Charles Lindbergh, amongst others, who flew in and out of the field there.

Before the outbreak of the war, and with tensions growing over the involvement of the United States in the worldwide conflict, Lillian continued flying. She applied to the U.S. Army Air Corps for a new program being developed that sought to recruit and train civilian female pilots to fly military aircraft for the United States Army Air Forces (USAAF). The program was implemented so that women could relieve male pilots from stateside flying duties, hence freeing men for overseas combat operations. Started as a civilian unit after the attack on Pearl Harbor in December 1942, the program was begun in a time of emergency with the intent to militarize the woman’s unit at a later time.

Regardless, Lillian wanted to fly for her country and shortly after her 21st birthday, with the minimum of 35 hours required to join the program at that time, she received a telegram accepting her into the Women’s Flight Training Detachment (later known as the WASP, or Women Airforce Service Pilots). Prior to reporting to Avenger Field in Sweetwater, Texas for training, Lillian borrowed money from her boss, completed her physical at Mitchel Field, L.I. and flew to Ft. Worth, TX where she boarded a train to Sweetwater.

During her training at Avenger Field, Lillian attended ground school, flew primary, basic and advanced trainers and followed all of the program’s rigorous military protocols. Advancing through all three phases of training, Lillian graduated with Class 43-7, the seventh class of 1943. Aware of the dangers involved in flying military aircraft, Lillian put fear behind her and focused on completing the program. “I was not afraid and did not waste time on worrying. Life is to be lived!” said Lillian.

After graduation, WASP Yonally was assigned to be one of 20 women trained to fly the Mitchell B-25 medium bomber at Mather Field in Sacramento. “I never dreamed I would be flying a bomber, but I loved it. It was a great airplane…fun to fly… and it made the most glorious racket! she exclaimed. When one of her fellow classmates dropped out of the B-25 program to get married, Lillian thought it was an unwise choice…. saying, “You can always get married, but you can’t always fly a B-25!”

Graduating from Mather, Lillian achieved her instrument and commercial ratings and from there she was assigned to the training command at March Field in Riverside, California where she towed targets over the Mojave. Here, ground troops fired live ammunition at fabric sleeves that trailed some 30 feet behind her plane, as Lillian strafed the troops below. She also flew nighttime searchlight missions in the SBD Dauntless.

After the WASP were suddenly disbanded in December 1944, Lillian was sent to Hamilton Field where she caught a ride in a B-24 part of the way home, returning to the East Coast on Christmas Eve. After the WASP, she worked for Sperry Gyroscope in Mineola and lived in the neighboring Garden City on Long Island. There, she owned an airplane with three other pilots, which she would fly every fourth weekend via Montauk Point to visit her family in New Bedford, near Cape Cod. Eventually, Lillian sold her share of the airplane and in 1946 she married Jim Yonally, who she had met earlier in California while towing targets.

While raising her six children in the 1950s and 60s, Lillian rarely spoke of her service with the WASP, but in the 1970s, when the government announced that they would be training the first American women to fly military aircraft, she began to open up. Working for the Bureau of Labor Statistics, Lillian helped in the hard-fought effort to grant the WASP retroactive military status, which they were finally awarded in 1977. “I was proud to be part of the WASP. You do something like this, and it does change your life. It gives you a feeling of independence and capability. Nothing has ever slowed me down. I drive right through. It’s part of that ‘You can do it!’ business.”

Three decades later, in March 2010, Lillian and family attended the ceremony in Washington D.C. were the WASP were collectively awarded the Congressional Gold Medal. 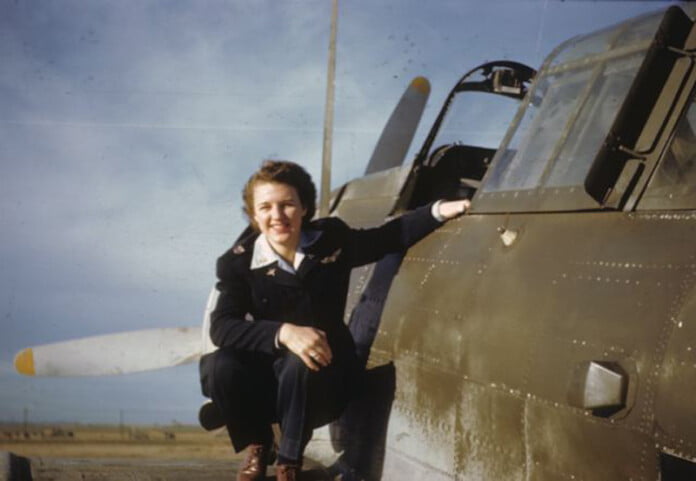 Lillian in WASP uniform, on the wing of a Douglas Dauntless, 1944.