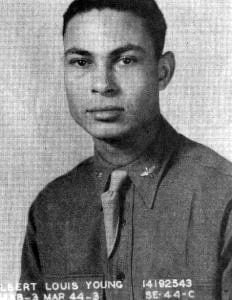 Albert L. Young was born on October 13, 1921 in Memphis, Tennessee. He lived with his mother Hazeline at the address 500 S. Wellington Street, Memphis, Tennessee. After graduation at the high school he worked at Peabody hotel at Memphis as a waiter.  He enlisted in 1943, was trained at the known airbase in Tuskegee in Alabama and completed the training, as a member of the class 44-C-SE on March 12, 1944. From May to June 1944, he served at the 324 FG based in Pignataro, Italy and from July 1944, when 99 FS, 100 FS, 301 FS and 302 FS formed a new 332 FG, he was assigned to this unit, specifically to its 100 FS based in Ramitelli, Italy. This unit whose both flying and ground personnel was created by the Afro-American soldiers, is known as “Tuskegee Airmen“.

Flight Officer Samuel J. Foreman reported engine trouble over northern Yugoslavia and started to turn back to Ramitelli Air Field in Italy. His flight leader ordered Foreman back to formation, and he was last seen completing a turn back toward the P-51s.

An hour later, Young reported engine trouble then disappeared when the flight entered clouds over Vienna.

“The flight leader called to tell the formation to drop tanks,” 1st Lt. Sanford M. Perkins wrote in a military report. “We did so. I saw (Young) on his back, dropping one tank. I followed him into the overcast; spun, recovered and came out of the overcast at 28,000 feet. I was unable to contact him on the radio.”

Albert died in Czechoslovakia (now Czech Republic) 100 km to the north of expected area of the operations. His P-51C hit the ground close to a small village of Opatovice and Albert’s body was found 1 km away from the wreck. It is believed that Albert woke up shortly before impact, bailed out but his chute failed to open due to the low altitude.

According to amateur Czech historian Jan Mahr, Young’s body was found later that day in a field south of Brno, Czechoslovakia. Young was buried in a local cemetery on Jan. 22; his remains were exhumed and reburied at the Lorraine American Cemetery and Memorial in France in September 1946. Young’s plane, Mustang P-51C-10-NT, S/N 42-103454, was excavated in December 1990.