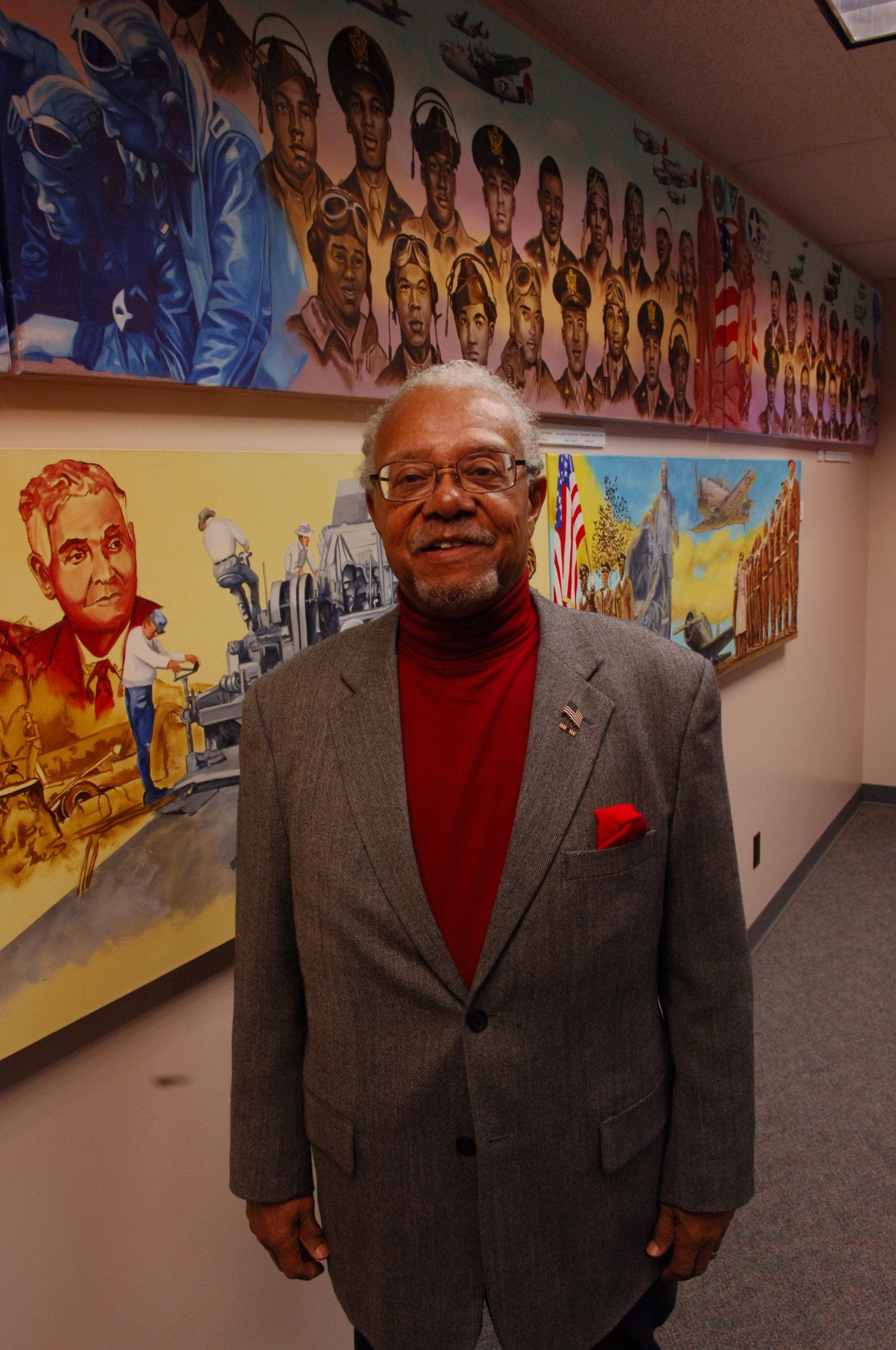 SCOTT AIR FORCE BASE, IL. –  During World War II, the all African American fighter pilots of the 332nd Fighter Group overcame racial discrimination to distinguish themselves as the unit who never lost a bomber to enemy aircraft.

Stories of their individual and collective heroics–which include 150 Distinguished Flying Crosses, eight Purple Hearts, 14 Bronze stars and a Distinguished Unit Citation–inspired a local artist to create a series of paintings depicting the men who risked their lives for their country and each other.

William Curtis, who’s been painting since the age of four, spent two years developing this project, which is now on display at the base library through March.

“I try to show in my work things that are not only recognizable, but also tell a story,” said the St. Louis native. “When I get into a series, I like to explore the full range of the story of the Tuskegee Airmen, and that’s why this series is really developed.”

He said a quote that inspired him is the one by group commander, Col. Benjamin O. Davis, who said, “There is no greater conflict within me than how I feel about my country and how my country feels about me.”

Despite the challenges, the 332nd would complete more than 15,000 sorties, shoot down 109 enemy aircraft and destroy another 150 on the ground. They lost 66 of their own who were killed in action and 32 pilots who were captured and became POWs.

Curtis said he began to focus on the men who received Purple Hearts and his goal was to paint each of their portraits as part of his series.

From there, he researched information about the legendary Airmen. He eventually received some personal stories from Lt. Col. Leo Gray while painting his portrait. Gray graduated from the Tuskegee Army Air Field as a second lieutenant, single engine pilot. He flew 15 combat missions in P-51s for a total of 750 flying hours.

“This led me to research even further,” said the painter. “I read books and contacted descendants of the Airmen, who lead me to other contacts. I went down to Tuskegee; I visited the airstrip and museum and got some more information that way as well.”

As he received more information, he expanded the portraits to not just Purple Heart recipients but as many of the men who fought, as well as capturing the events and aircraft they flew.

“I started off on one panel, but as I discovered more and more, it grew into two and then into a three panel painting,” he said. “I have only been able to complete about 50 portraits done so far.”

While researching, he found and interviewed two Tuskegee Airmen who live in the St. Louis area–Capt. Christopher Newman and Capt. Charles Harvey Jr. They gave Curtis detailed stories about their experiences.

“The markings on their planes and the bombers they escorted are authentic markings,” he said. “Everything you see is as accurate as I could get it.”

Curtis said he feels that it’s important for people today to know about the Tuskegee Airmen and what they did.

“The descendants of those who flew the bombers are living today thanks to the escort missions the Tuskegee Airmen provided,” Curtis said. “Many of the relatives were unaware that these men saved their ancestors during war.”

He said he hopes that people understand how the Tuskegee Airmen had to fight two wars, one against Nazis and one against racism in America.

“I just hope people realize the full measure of what the Tuskegee Airmen have done, and hopefully in some small measure these paintings will add to their understanding.”