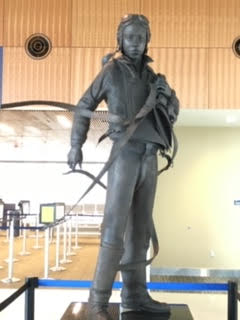 Statue of Major Joseph P. Gomer on display at the Duluth International Airport

Duluth International Airport installed a life-size bronze statue of Tuskegee Airman pilot Joe Gomer in the fall of 2012. The sculpture, created by artist Tim Cleary, features Gomer as a young pilot in his flight suit.

Gomer, who stood 5 feet, 9 inches tall, said the statue matches his memory of himself as a 1940s fighter pilot who flew 68 missions as one of the black airmen who broke the color barrier and flew over Europe. “In my prime, I was 155 pounds, so that’s about right,” Gomer said as he gazed at his likeness, shown in flight gear. “I never thought I’d see this in my time,” the Duluth man said. “But I never thought I’d live to see a black commander-in-chief in my time, either.” It was Gomer’s 92nd birthday, and daughters Tanya Rice of Spokane, Wash., and Phyllis Douglass of Claremont, Calif., were on hand for the event. “It’s a thrill for him to be able to represent the Tuskegee Airmen in this way,” Rice said. “I think it’s a beautiful honor and I’m very proud of my father and all that he’s done.” Both Rice and Douglass said their father said nothing of his exploits in the war when they were growing up. “He just never thought that I’d be interested,” said Douglass. In fact, she was so interested that she started a website as a tribute to her father in 1997.

Tim Cleary, visual arts chairman at the University of Wisconsin-Superior, said that he tried to create a windblown look for the statue. Cleary succeeded, Douglass said. “I think it was a beautiful interpretation, not only of my father, but also of flight,” she said. 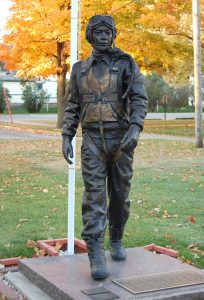 Tuskegee Airman pilot Joe Gomer‘s hometown of Iowa Falls, IA honored him in April of 2013 with a statue on the campus of Ellsworth Community College, where he attended prior to his War service. The piece was funded by donations from the local community and was designed by artist Charles R. Taylor and sculpted by Sutton Betti of Loveland, CO.

The statue is located in the green space between Bullock Jones Hall and Reg Johnson Hall on the campus of Ellsworth Community College.

See other postings of his statue: