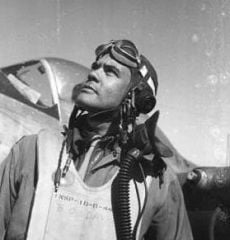 On December 18, 1912 Benjamin O. Davis Jr. was born in Washington, D.C. He was the son of Elnora Dickerson Davis and Benjamin Davis Sr., at the time one of only two black combat officers in the U.S. Army, and the distinguished man who would later become our nation’s first black general of the U.S. Air Force. Davis Jr. would go on to play a prominent role with the Tuskegee Airmen, and himself become a pioneer in military leadership for black Americans. Although he was born over 100 years ago, his significance and the respect he commands endure today.

As a boy, Davis developed a keen interest in aviation after attending a barnstorming exhibition at Bolling Field in Washington, D.C. where one of the pilots offered him a ride in his plane. This experience set in motion Davis’ passion to one day become a pilot, despite the obstacles he would face simply because of the color of his skin.

After time spent at two other colleges, Davis attended the U.S. Military Academy at West Point with the appointment of the only black congressman serving at the time, Illinois Representative Oscar De Priest. Unfortunately, during his education he was shunned by his fellow cadets, forced to bunk alone and even eat all his meals in isolation. No cadets, faculty or staff members befriended or spoke to him except on an official basis. He was made to feel unwanted and unvalued because of that era’s prevailing ignorant racism. In a show of great perseverance and strength, in 1936 Davis became the fourth black American to graduate from West Point, and the first in the 20th century, graduating 35th in his class 276 cadets.

After being commissioned as a second lieutenant, he became one of only two black combat officers in the Army, the other being his father. Even after his treatment at West Point, he still had the tenacity and passion to become a pilot but was turned down for flight training because there were no black units in the air service, and therefore he could not be accepted, despite his qualifications. He was eventually placed at the Tuskegee Institute in 1939 as an instructor in their Reserve Officers’ Training Corps program, following in his father’s footsteps, and he quickly moved up the ranks. But the passion for flight remained.

In 1941 when the Air Corps Advanced Flying School was activated at Tuskegee, Davis was among the first class of pilot candidates. He became one of only five men to complete the course and then became the first black officer to make a solo flight in an Army Air Corps plane. A dream was realized, and in July 1942 he was assigned as the commander of the 99th Pursuit Squadron, going on to provide exemplary leadership to the Tuskegee Airmen as they prepared for and fought in World War II in the European theater. He flew many successful missions in the P-47 Thunderbolt and P-51 Mustang and was awarded the Silver Star and the Distinguished Flying Cross. Davis’ name would become synonymous with the success of the legendary Tuskegee Airmen. 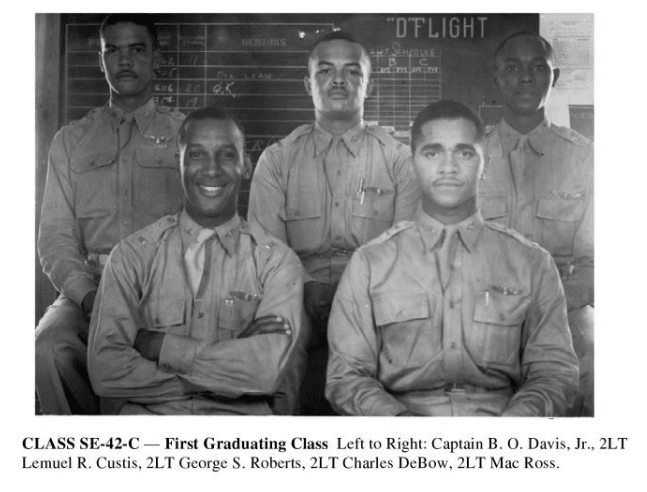 Davis is credited for playing an important role in the desegregation of the armed forces that finally came about in 1948, helping to draft the Air Force’s plan to carry out this order. He then went on to become the first black graduate of the Air War College, critical to his continued promotion in the Air Force, and again flew missions during war time in the Korean conflict. He continued to rise in the ranks, all while rising above adversity.

Davis’ final promotion to general (four stars), U.S. Air Force, occurred on December 9, 1998. He is our first African American general of the U.S. Air Force, and our nation’s second African American general officer, his father Davis Sr. the first. At the ceremony, while addressing other original surviving Tuskegee Airmen, President Bill Clinton said, “To all of us, General Davis, you are the very embodiment of the principle that from diversity we can build an even stronger unity and that in diversity we can find the strength to prevail and advance. If we follow your example, America will always be strong, growing stronger. We will always be a leader for democracy, opportunity, and peace. We will be able to fulfill the promise of our founders, to be a nation of equal rights and dignity for all, whose citizens pledge to each other our lives, our fortune, our sacred honor, in pursuit of that more perfect Union.”

In March of 2015, West Point announced their newest cadet barracks would be named for Davis. “General Benjamin O. Davis Jr. epitomizes the essence of character and honorable living we strive to inspire in every cadet at West Point,” said Lt. Gen. Robert L. Caslen, West Point superintendent. Davis’ struggles may not be erased, but a culture of understanding and gratitude is certainly welcome and due.

Davis passed away in 2002 at the age of 89. We thank him for his example of perseverance, dedication and commitment to country.