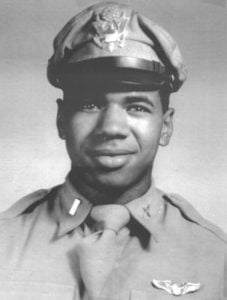 He graduated from Tuskegee Army Air Field on March 11, 1945 part of class TE-45-A, trained to fly twin engine B-25 bombers as part of the 477th Bombardment Group. The bomber pilots and crew would never deploy as the War ended in the Pacific before they were sent overseas.

During training, Dorkins was part of group of officers that was arrested for trying to gain entrance into a military officers club at Freeman Army Airfield in Indiana. The event would become known as the Freeman Field Mutiny, a non-violent act of protest that went on to become a treasured and landmark point in the burgeoning civil rights movement.

Early in 1945, the 477th was moved twice, first to Kentucky, then to Indiana. It was here, at Freeman Army Airfield, that the group’s Commander, Col Robert Selway, created 2 clubs – segregating “trainees” from “instructors.” This distinction was a thinly-veiled disguise for the real purpose, which was to segregate the black officers, all of which were trainees, from the instructors who were white.

There had been issues with officers’ clubs in the past, but at Freeman Field the black officers took a stand, and ended up in the history books. Over the course of several days in April 1945, black officers, in small groups, tried to enter the white-only officers club, each time met with greater resistance. Eventually, 120 black officers who had tried to gain entrance were arrested. All would be released later that month, but it would be decades before they were fully exonerated for their protest.

After his experience as a Tuskegee Airman, he devoted himself to his career as a photographer and filmmaker. He moved to Manhattan after his WWII service as a 2nd Lieutenant and a B-25 pilot. The first big project that introduced him to the world was as the photographer on a “round-the-world mission of cultural sharing”, a mission of Americans of various races and nationalities sponsored by the United Nations, in which Charles met several world leaders, such as Nehru and the Shah of Iran.

A career as a military or commercial pilot did not attract him, so he proceeded to establish a stellar reputation for his outstanding work as a photographer and moviemaker. This type of career in film production was an “East Coast” achievement. Following his award-winning documentary in the early 1960s for NBC about the revolution in the then Belgian Congo, in which he lived with the revolutionaries and was injured, he has many adventures traveling, producing and filming non-documentary films (i.e., A black film production of Hamlet, shot in the Bahamas) as well as documentary film work.

There are too many notable documentaries produced, filmed and directed by Charles: a look into the real life and character of the black neighborhoods of Detroit in the late 1960s (film commissioned to show the real human side of life to the rest of the world, particularly the white suburban population during the peak of racial tension in the 60s); a documentary on the Tuskegee Airmen which started with recollections of the airmen at an anniversary gathering; and a privately commissioned documentary about life; land development in the Amazon jungle by one of the wealthiest entrepreneurs in the world, just to name a few.

For a look into Dorkins life and service as a Tuskegee Airmen see these items in the CAF Red Tail Squadron Virtual Museum: