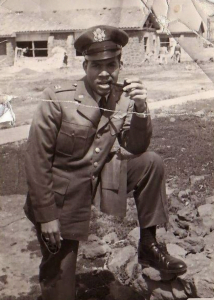 Col. Ernest Craigwell Jr. served in the armed forces from 1945 until his retirement in 1973. When he first enlisted, he was assigned to the elite 332nd fighter group of the U.S. Army Air Corps, the so-called Tuskegee Airmen.

In the cockpit Craigwell recorded more than 6,000 hours, including 4,100 in a fighter plane, between the end of World War II, the Korean and Vietnam conflicts. He also logged more than 400 combat missions while in the military, earning a total of 26 medals of valor.

When he began his military career, Craigwell was transferred to the Tuskegee Army Air Field in Alabama where he worked as a crew chief due to the cadet program closing months after he arrived. He worked his way up to becoming a fighter pilot and served on air bases across the country before being assigned to the 36th Fighter Squadron in the Korean War in 1950.

Right before he was scheduled to leave Korea, Craigwell was assigned to the Korean Air Force and was part of a group of American soldiers who instructed Korean pilots on how to fly fighter planes and led them into combat. His service in the States and Asia earned him fighter pilot wings from the U.S. and Korean Air Forces, a rare honor. 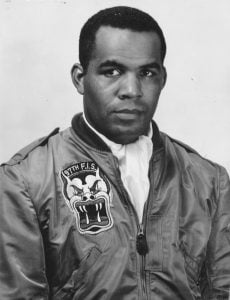 “During peacetime, us soldiers fed at the public trough. When war came, I wanted to be the first one there and the last one back … I felt that I owed that much at least,” Craigwell said.

In addition to his military decorations, Craigwell is also a recipient of a bronze replica of the Congressional Gold Medal. This award, given to the Tuskegee Airmen by President Bush in March of 2007, is the highest civilian award given by Congress. Th original gold medal is on display at the Smithsonian Institution (National Museum of African American History and Culture).

Despite these accomplishments, Craigwell said his goal was never to earn awards, get promotions or win prestige.

“When I was flying, I didn’t care about rank – I was having too much fun,” he said. “Monday was the best day of the week for me because it meant I had four more days of flying.”

During his speech, Craigwell also described some of the difficulties faced by African Americans receiving recognition for the work they did and sacrifices they made during Word War II.

He said the country has made significant strides in honoring African American servicemen in the last 60 years but that there is still much work to be done.

“For every one of us, there were plenty of mechanics, truck drivers, cooks, factory workers that deserve to be honored,” Craigwell said.

Craigwell said he felt it was important to honor those who made contributions in all sectors of the war effort because if those individuals are not honored, they and their contributions may be forgotten.

We salute Col Craigwell for his service, may he continue to soar with the eagles!

Photograph of Ernest Craigwell with Medal of Honor

Watch the YouTube video of Retired Air Force Colonel Ernest Craig­well speech that was captured at the Memorial Day tribute held May 26, 2008 in Millbrook, AL.