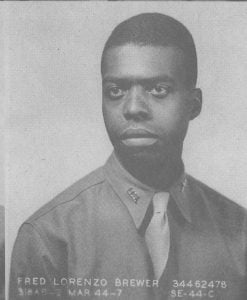 Tuskegee Airman Fred Brewer’s family would never see him again after he left to fly and fight in Europe during World War II. Although not much is known about Brewer’s life, we honor his service and reflect on his achievements.

Fred Lorenzo Brewer Jr. was born in 1921 in Charlotte, North Carolina to Fred and Janie Brewer. He had one sister, Gladys. The family attended Ebenezer Baptist Church in Charlotte.

In 1938, Brewer graduated from the Second Ward High School in Charlotte, then went on to attend Shaw University in Raleigh. While in college, he was listed in the 1941-42 edition of Who’s Who Among Students in American Universities and Colleges; served as editor of the Shaw Journal and Bear during his junior and senior years; was a student representative at the National Intercollegiate Christian Council at Lake Geneva, Wisconsin in 1941; and was a delegate to the National Conference of Negro Youth in 1942. Brewer graduated from Shaw University in 1942.

In November of 1943, Brewer enlisted in the U.S. Army. He went on to train to become a single engine fighter pilot at Tuskegee Army Air Field in Tuskegee, Alabama. He graduated from advanced flight training with class 44-C-SE on March 12, 1944, then received combat training in April at Selfridge Air Field and in May at Walterboro Army Air Field before being sent overseas to fly in the European Theater of the War shortly after. He was the only Tuskegee Airman pilot from Meklenburg County, North Carolina. 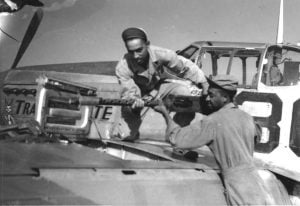 While on a return flight to Ramitelli Air Field, Italy from an escort mission on October 20, 1944, 2nd Lt. Brewer’s P-51C Mustang “Travelin Lite” stalled at about 19,000 feet while climbing to altitude in overcast conditions. Members of 100th Fighter Squadron had been escorting B-24s of the 49th Bombardment Wing to and from Regensburg, Germany. It is believed his aircraft went down at roughly 11:15 a.m. due to engine trouble 3.5 miles northwest of Dellach, Germany, which is now part of Austria. He was last sighted by Tuskegee Airman 2nd Lt. Charles Duke. His body was not recovered and he was designated killed in action. Brewer was only 23 years old. Read the Missing Air Crew Report (MACR) in the CAF Red Tail Squadron Virtual Museum.

Tuskegee Airman Capt. Alfonza W. Davis was also reported missing and killed near the Gulf of Trieste on that same mission. The official MACR lists the cause as unknown.

Remains were later found near the site but not enough evidence was ascertained to identify them as Brewer’s. Those remains are marked unknown and laid to rest at Florence American Cemetery south of Florence, Italy. Brewer is memorialized in their Tablets of the Missing that includes 1,409 inscribed names and sits atop a hill overlooking the graves of American soldiers recovered and laid to rest.

For his service, he was awarded the Purple Heart and Air Medal with one bronze oak leaf cluster, which was given to his family. Brewer must have been a source of joy and pride for his family. 2nd Lt. Brewer, we honor you for your service to our country and may you rest in peace. 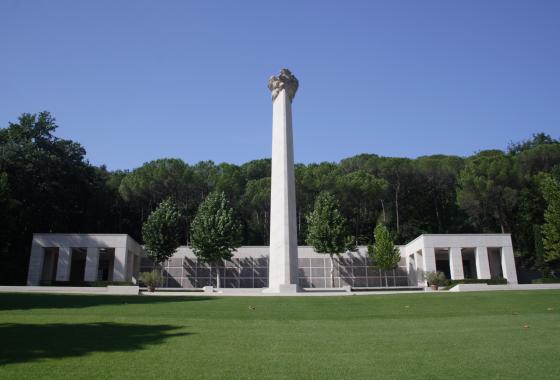 The Florence American Cemetery’s Tablet of the Missing memorial 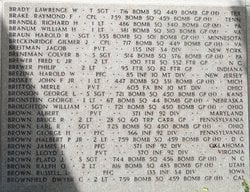 2nd Lt. Fred Brewer listed on the Tablet of the Missing

Materials provided by Katherine Rasdorf with the MIA Recovery Network