Academic administrator and Tuskegee Airman Herbert Eugene Carter was born on September 27, 1919 in Amory, Mississippi to parents Willie Ann Sykes Carter and George Washington Carter. He graduated from Tuskegee High School in 1941 and went on to join the United States Army in July of 1942 as a member of the 99th Fighter Squadron, which was one of the units that became known as the Tuskegee Airmen.

While in World War II, he flew seventy-seven combat missions against the German and Italian Air Force in the Northern Africa, Sicilian Italian and European campaigns. The 99th Pursuit Squadron achieved the outstanding record in Close Tactical Ground Support of the Allied Army. After the war ended, Carter went on to receive his B.S. degree in industrial education in 1955 from Tuskegee University and his M.A. degree in Administration and Supervision in 1969.

Carter retired with the rank of lieutenant colonel in the United States Air Force after twenty-six years of commissioned service in 1969. After his retirement, he served at Tuskegee University as Associate Dean of Student Services and Administration until 1985, and continued to visit troops who were deployed overseas. 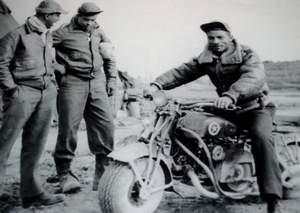 Tuskegee Airman Herbert Carter tries out a captured German motorcycle as two buddies watch during a lull in fighting during World War II.

On June 6, 2006, Carter received the Chevalier Legion of Honor, France’s highest honor and most prestigious award. The award was presented to him by Jacques Chirac, former President of the French Republic, for his outstanding service during the liberation of France during World War II. In March 2007, President George W. Bush honored the Tuskegee Airmen with a bronze replica of the Congressional Gold Medal.

Lt. Colonel Herbert Carter died at the East Alabama Medical Center in Opelika, Alabama, on November 8, 2012, at the age of 93. Carter was the last surviving Tuskegee Airman from Mississippi. His late wife, Mildred L. Hemmons-Carter, who died in 2011, was the first African American woman to become a licensed pilot in the state of Alabama. Together, the Carters were known as the “First Family” of the Tuskegee Airmen.