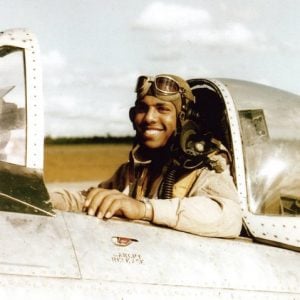 The passion that fills one’s heart for aviation can be a powerful force. Since the age of four, William Holloman wanted to fly, and that lust for the freedom of the skies stayed with him until adulthood, leading him to a long and prosperous career in the military. His illustrious time in the service and the extremes of racism that he experienced fueled his volunteer service in retirement. He spent years educating as many people as he could about the history of the Tuskegee Airmen, inspiring them to identify and achieve their own lofty goals.

Holloman was born August 21, 1924 in St. Louis. Growing up, he was fascinated by airplanes. He was known to regularly walk two miles to a local airfield to watch the aircraft takeoff and land. He was hooked, and no amount of unjust racial stereotypes or discrimination was going to keep him out of the cockpit.

In August of 1942, Holloman completed his aviation cadet exam and began training to become what are known today as the Tuskegee Airmen. He graduated from training at Tuskegee and received his wings from the U.S. Air Corps in September of 1944. See his class photo in the CAF Red Tail Squadron Virtual Museum.

Assigned to the 99th Fighter Squadron, he flew 19 missions out of the segregated air base in Ramitelli, Italy in 1944 and 1945. Protecting bombers, strafing targets on the ground and engaging in fighter sweeps was done with great skill in his P-51. He went to war to serve his country, but to also fulfill his dream to be an airman, flying and fighting from the air.

He has said that he didn’t fully understand at the time how racist our country was when he was a young man, because growing up he didn’t feel the sting of that injustice until he was older. During the war, his fighter group was segregated in Ramitelli, the white bomber crews they were heralded for protecting stationed elsewhere. In an interview with Smithsonian’s Air & Space Magazine in 2007, Holloman remembers the significance of that separation.

“When we went to town, we had lots of contact with them. In Italy, we were all stationed separately but within 25 or 30 miles of each other. They embraced us when we went to town. They wouldn’t let us buy our own drinks. They were very friendly. We were all brothers in arms in a combat area,” he said. “Segregation didn’t show itself until we got back to American soil. You get off the boat, and it’s all right there. I don’t think that I really hated the social structure of the United States until I came back from Italy. It was kind of sad.”

After World War II, Holloman didn’t stop flying. He took jobs that included crop dusting in Central America and flying for a regional commercial airline in Canada. With the country drawn shortly after into the Korean War, Holloman was called back to service, attending airborne electronics school then becoming the first black helicopter pilot in the United States Air Force.

He was again activated in 1966 for the Vietnam War. He became a leading instrument examiner, check pilot and director of safety and standards. Holloman retired from the service as a Lieutenant Colonel in 1972, designated as a Master Aviator with 17,000 flight hours in military aircraft, an impressive feat at any standard. Listen to Holloman talk about his memories from his time as a pilot in an interview with the Planes of Fame Air Museum shortly before his passing.

After his four decades of service, Holloman dedicated much time and effort to speaking out and organizing events to bring attention to the history of the Tuskegee Airmen, who had little widespread recognition before the Hollywood adaptations of their story. Among many activities and appearances, he was active in the Tuskegee Airmen, Inc. organization, was a technical advisor for the film “Red Tails,” and provided a great deal of research assistance to the historical reference book The Tuskegee Airmen: An Illustrated History.

He also earned degrees in business administration from the University of Maryland and in history from the University of Washington. The Seattle area became his home, and he developed a very close relationship with their Museum of Flight. There he helped develop the museum’s Tuskegee Airmen exhibit and participated in numerous panels to educate people about the Tuskegee Airmen, veterans issues and the history of black Americans in the military. His original flight jacket is also proudly displayed in Seattle’s Northwest African American Museum. 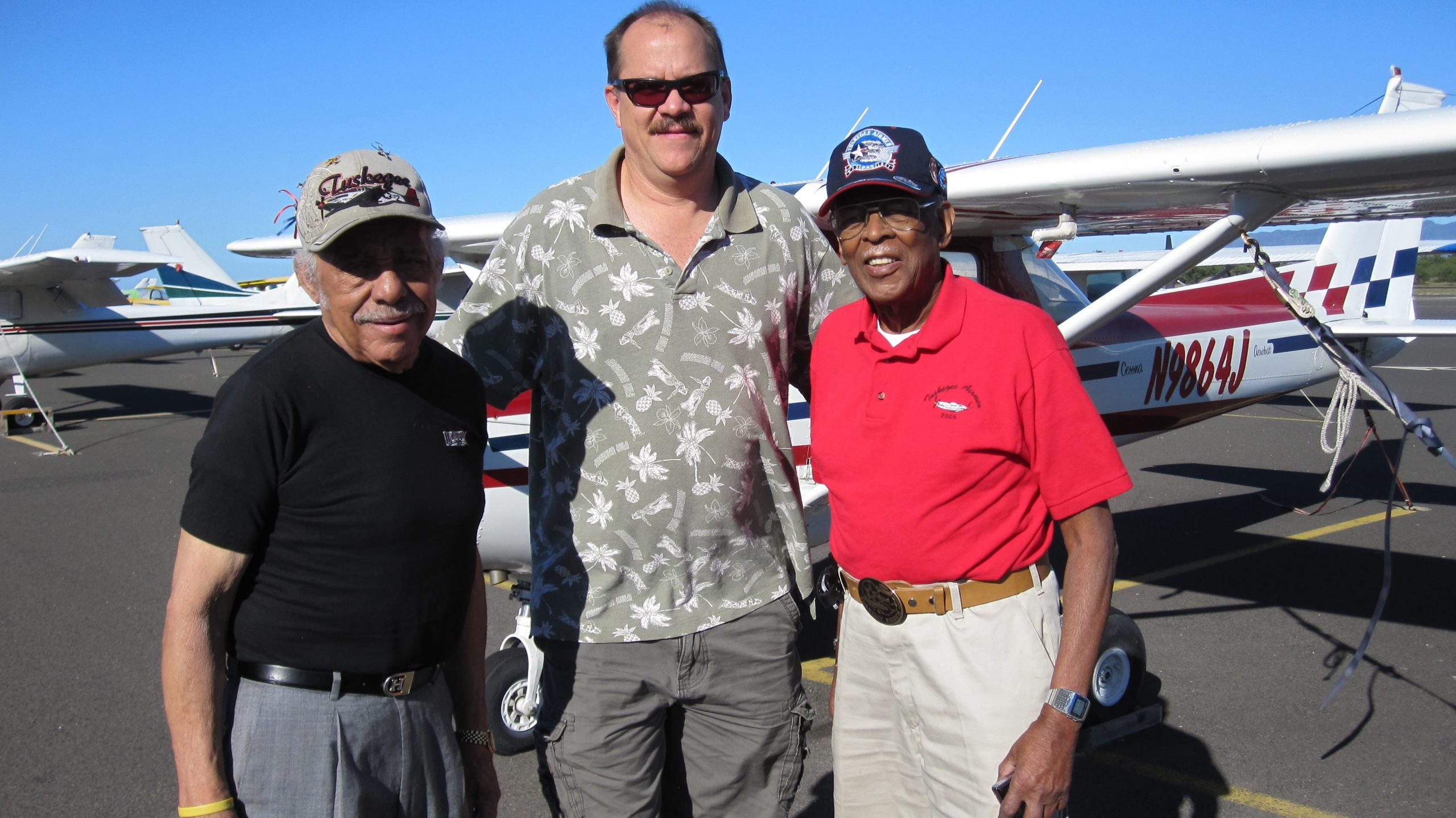 CAF Red Tail Squadron P-51C Mustang pilot Alan Miller had the distinct pleasure of spending time with Holloman and enjoying his friendship for many years. Holloman was very close with original Tuskegee Airman Alexander Jefferson, both sharing details of their service and experiences as Tuskegee Airmen with Miller.

“Bill was the life of the party everywhere he went,” remembers Miller. “He and Alex were often found together, and now Alex speaks for both of them. He is carrying the torch to make sure others know about the amazing lives they and the other Tuskegee Airmen led, and how we can all learn from their experience.”

Holloman may have retired from the military, but in a sense he never stopped serving his country. His personal dedication to educating and inspiring others through the important history of the Tuskegee Airmen left an impact on the audiences he reached.

Holloman passed away in 2010, leaving behind his wife Adele and their six children and many grandchildren. Lt Col Holloman, we salute you for your service. 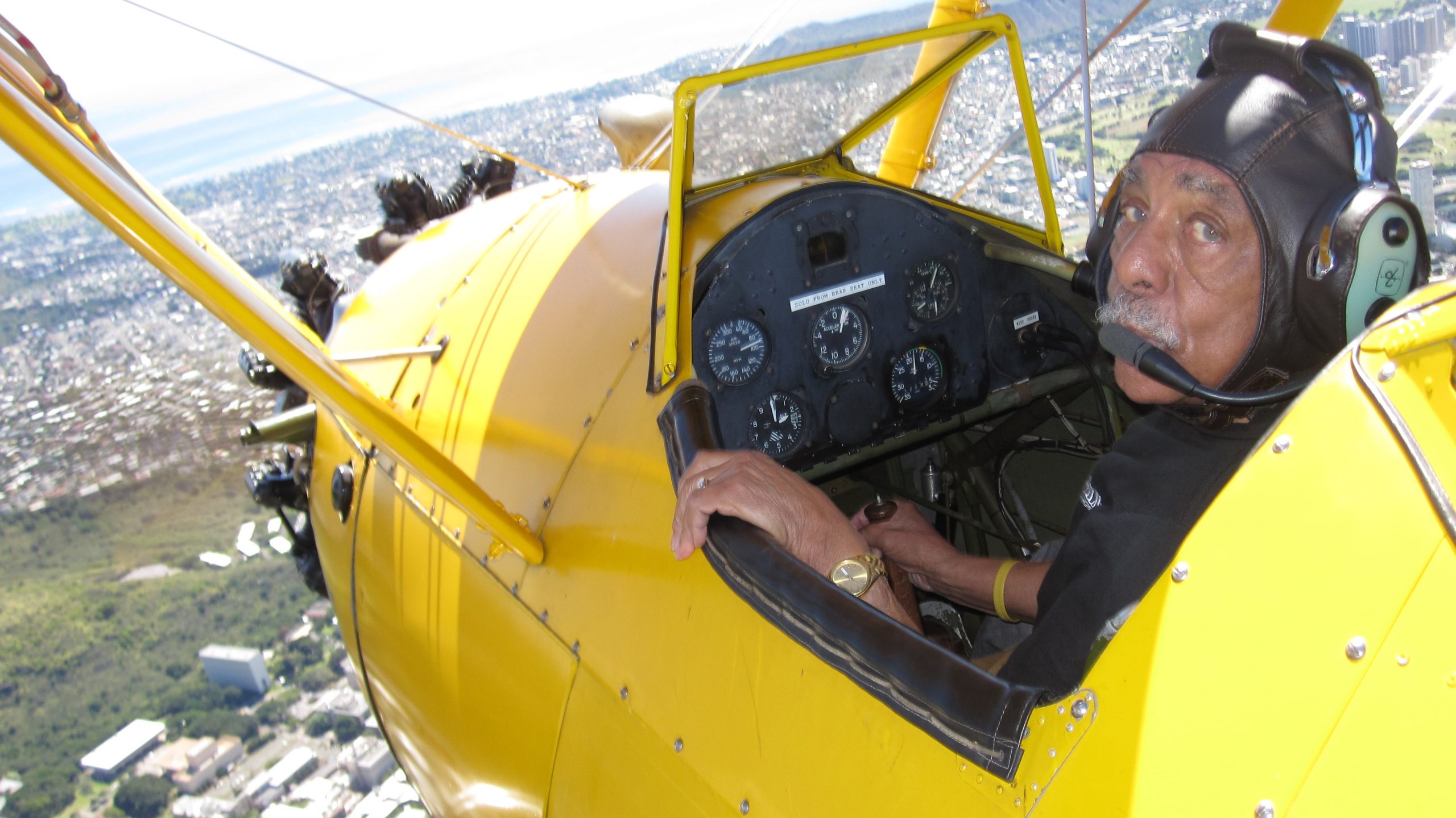 Bill Holloman in Stearman in Hawaii