Clarence E. “Buddy” Huntley Jr. was a 19-year-old dedicated, determined young man who enlisted in the segregated Army Air Corps in October, 1942 in downtown Los Angeles with his childhood friends Robert Boyd, William Lee, and Lemon Foster, to become members of America’s All Black Air Force. (Commonly referred to now as the Tuskegee Airmen) This was during a time when there were many individuals who thought that the young black men of the 1940’s lacked the intelligence, aptitude, and skill to be anything other than a non-skilled laborer in the United States Army. Clarence possessed all of those character assets in addition to having the courage, patriotism and a strong personal desire to serve the United States of America at the best of his ability.

Buddy and his friends soon found themselves on a train headed to the U.S. Army Barracks at The Presidio in San Francisco, CA. for induction and it was there where he met up with 2 of his other friends from Los Angeles – Raymond Walker and James Pratt who had also enlisted in the United States Army Air Corps. They were all outfitted with their first set of uniforms and placed on a train headed to Cheehaw Station, Tuskegee, Alabama.

Buddy’s first assignment was with the 318th Airbase Squadron for Basic Training. It was there where he learned how to solider. His days consisted of marching, close order drill, physical training, basic rifle marksmanship, and field training exercises. Pvt. Huntley quickly and effortlessly adapted to Army life as he had been raised in a large well-disciplined family and he was no stranger to rising early in the morning, cleaning and ironing his own clothes, and working hard all day.

After completing Basic Training Buddy was assigned to the 332nd Fighter Group, 301st Fighter Squadron under the command of Capt. Charles DeBow, however he was only in the 301st FS for a couple of months before he was sent TDY for 30 days to McDill Field, FL. Where upon his return from McDill Field he was reassigned as a weather observer in the 301st FS and shortly thereafter the entire 332nd FG moved from Tuskegee Army Air Field to Selfridge Field, MI.

On January 3, 1944 found the Group and all of its squadrons boarding several Liberty Ships. The 100th Fighter Squadron boarded the “S.S. John M. Moorhead”. The voyage across the bluish green Atlantic in the convoy was uneventful with the exception of a German submarine scare.

Buddy soon found his squadron briefly stationed at Montecorvino Airbase outside of Salerno, his squadron immediately began flying harbor and coastal patrol mission in the Bell P-39 Air-cobra from Capodichino Air Base. It was during this period in which Buddy requested to be transferred to the engineering section so that he could train to be a crew chief.

The job of a crew chief is one that carries with it a multitude of responsibilities and stressors on a daily basis. First off, the crew chief is responsible for the maintenance and readiness of his assigned aircraft secondly the pilot’s safety and life are in the hands of the crew chief. 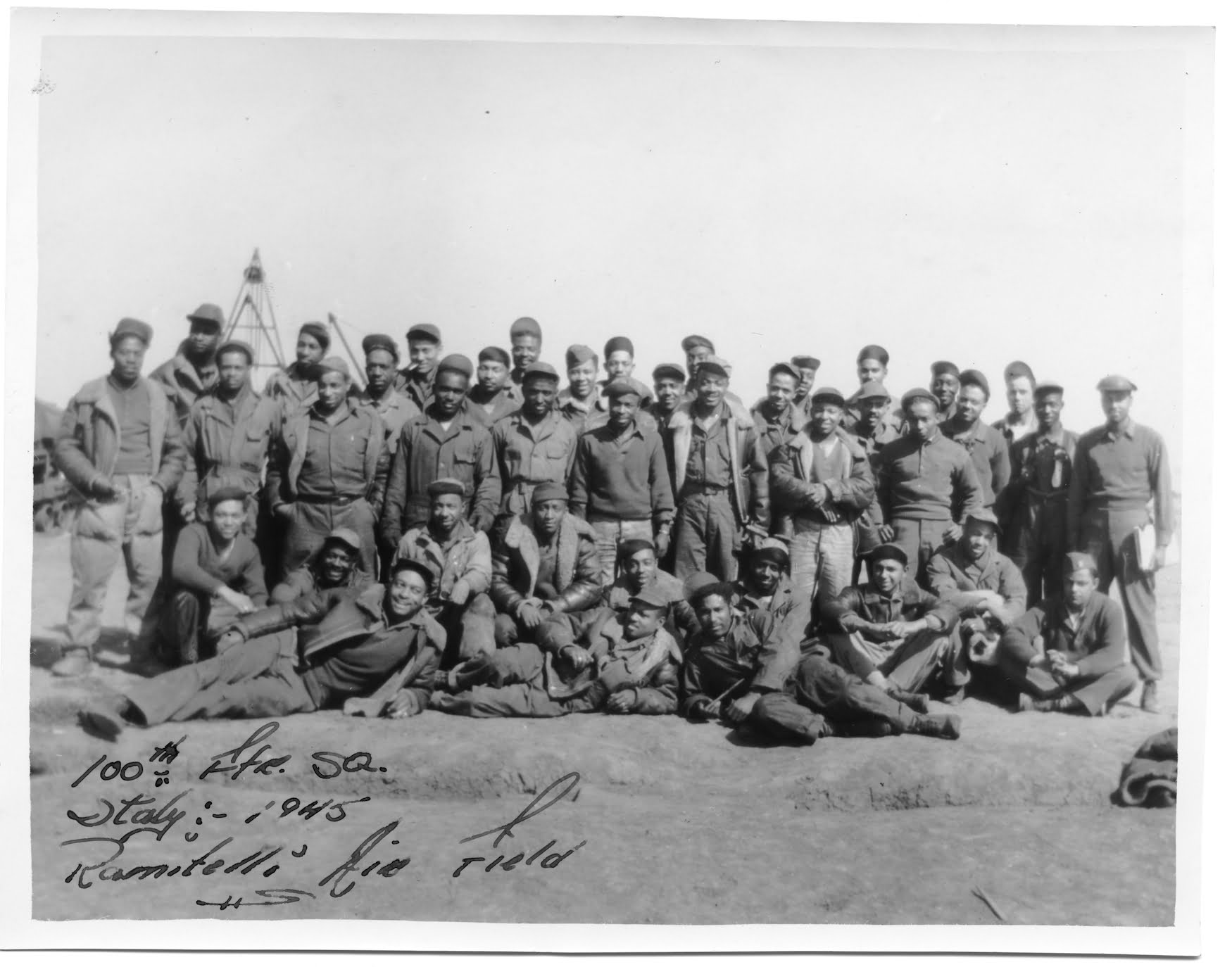 Buddy’s first assigned pilot Capt. Tresville went missing in action on June 24, 1944 as a result of flying low over the water for an extended period of time. Buddy was reassigned to the crew of Capt. Andrew D. Turner who became the next commanding officer of the 100th Fighter Squadron and his next aircraft was a beautiful shiny P-51C Mustang which he appropriately named Skippers Darlin III. 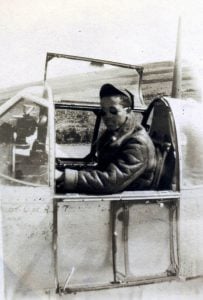 Buddy was affectionately called “Mother” by Capt. Turner. The relationship between a pilot and his crew chief is like that of a mother and her child. The term “Mother” that Capt Turner used was out of respect as it was his 19-year-old crew chief Sgt. Huntley that ensured that his ship was ready for each mission and that he never had to return early from a mission due to mechanical trouble. Whenever Capt. Turner would come out to the flight line to fly, he’d ask Buddy “How’s she running today mother” and Buddy would reply “She’s singing sweet skipper”. Capt. Turner successfully flew 69 long range bomber escort mission lasting anywhere from 5-8 hours per mission as a result of the thoroughness and dedication of his faithful crew chief.

One such mission was the March 24, 1945, 1600- mile round trip escort mission to the Damiler Benz Tank Works in Berlin, Germany, the longest mission ever flown by the 15th Air force. The  332nd Fighter Group was awarded the Presidential Unit Citation in part for the hard work and dedication of  maintenance crews, the courage and aggressiveness of the pilots, combined with the resourcefulness of the 366th Service Squadron and the leadership of its commander Col. Benjamin O. Davis, Jr.

The outstanding record of black airmen in World War II was accomplished by men whose names will forever live in hallowed memory. Buddy accepted the challenge, proudly displayed his skill and determination while suppressing internal rage from humiliation and indignation caused by frequent experiences of racism and bigotry at home and overseas. Buddy along with every other black airmen enlisted and officer alike fought two wars – one against the Axis powers and the other against racism at home and abroad. 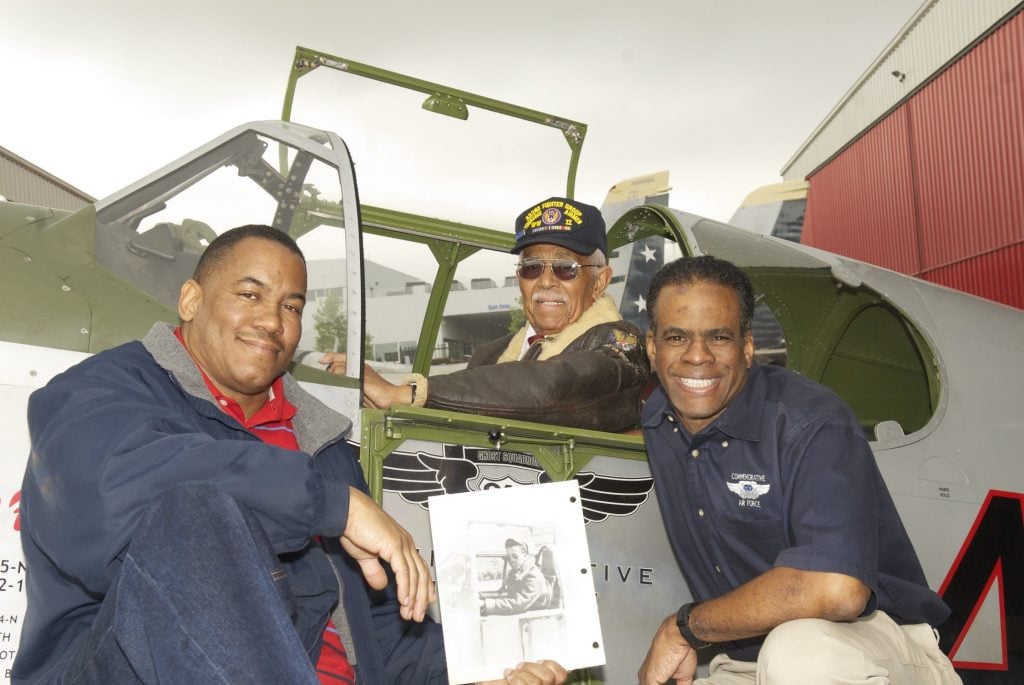