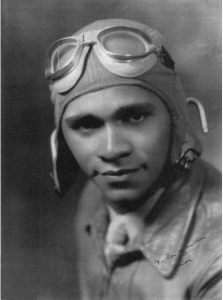 When tensions were mounting between the United States and Japan, and as the pressure of joining the war in Europe grew, Charles DeBow wanted to do his part. For him, that meant becoming a pilot, so he went to the Hampton Institute in Virginia to take flying lessons.

Before 1940, African Americans were not permitted to fly for any U.S. military branch. Civil rights movements led to the formation an African American flight squadron based out of Tuskegee, AL.

He eagerly joined the first aviation class with 13 cadets on July 19, 1941, with ground school training in subjects such as meteorology, navigation, and instruments. Successful cadets then transferred to the segregated Tuskegee Army Air Field (TAAF) to complete the Army Air Corps pilot training. The Air Corps provided aircraft, textbooks, flying clothes, parachutes, and mechanic suits, while the Tuskegee Institute provided the facilities for the aircraft and personnel. Lt. Col. Noel F. Parrish served as the base commander from 1942-46. 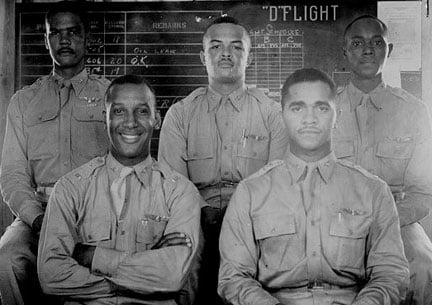 In March 1942, Life magazine published an article about the newly incorporated Tuskegee Airmen. For 10 cents, readers could buy the issue that included photos of DeBow.

A sign of the times, the article, in part, read: “White instructors of the 99th agree that their Negro charges, by virtue of exceptional eyesight, courage and coordination, will prove crack combat pilots. Upon their performance and promise hang the hope of additional thousands of aspiring Negro fliers throughout the land.”

DeBow commanded the 301st Fighter Squadron starting in 1943 when it was assigned to Italy and he flew 52 combat missions in the European Theater, including support for D-Day.

The 99th was deployed overseas to fight in the European theater. After 52 missions aboard a P-51 Mustang, Charles DeBow was injured and lost his flight status. When he returned home, and after the war ended, the young lieutenant colonel married and continued his education and eventually worked as a high school teacher and university professor in Indiana.

See the Class Photo and Orders Assigning The First Aviation Cadets To Tuskegee in our Virtual Museum!

Be sure to read “I GOT WINGS” by Charles H. DeBow – An Autobiographical Account of One of the Original Tuskegee Airmen