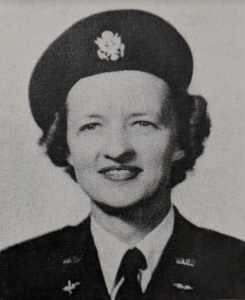 Dorothy was the only WASP to be awarded the Air Medal during WWII. Following the war, medals were awarded to other members.

Below is information from a college paper written by her granddaughter, Kelly Mackura, about her grandmother’s life.

Dorothy was the daughter of a Baptist Minister and his wife who moved around the Midwest about every 4-5 yrs. as her father changed church assignments. After her father retired from the ministry, the family moved to Lincoln, NE, where Dorothy attended high school where she excelled at swimming and playing the violin. Dorothy majored in English at the agricultural college in Lincoln. She went on to become editor of the Woman’s Page at the Kansas City Kansan newspaper, then a certified lab technician at Lincoln General Hospital. During this time, she earned her private pilot’s license and as WWII approached and she heard Pearl Harbor reports over the radio, she wanted to enlist in the Army as a certified lab technician but was only offered a place as a buck private as the Army was not giving commissions to lab technicians.  A quote from Dorothy, “That hurt my little old pride.”

Dorothy later received a letter from Jacqueline Cochran inviting women with air flight experience to join the WASP. She started with ferrying new planes from the manufacturer to where they were needed, and was later asked to become a flight instructor. She was an instrument flight instructor for the women and men returning from combat who needed to be taught the latest methods. She also evaluated flight performances of men returning from combat, or men grounded and wishing to requalify for flight in the U.S.A. This was sometimes made difficult by men who didn’t enjoy being taught or evaluated by a woman. The WASP borrowed a slogan from the English:  “A woman taught you to walk. A woman can teach you to fly.” After WWII, Dorothy began receiving letters from the CAA offering jobs in air traffic control. Through her work as an air traffic controller in Salt Lake City, she met and married fellow air traffic controller, Dave Hammett, in 1947. She and Dave raised 3 daughters in Los Angeles, CA and Okla. City, OK. During her children’s teen years, she worked Saturdays assisting our veterinarian with surgeries. In retirement, she and Dave moved to the Sun City retirement community in AZ.  Dorothy went on to spend many years as a successful real estate agent there.

Visit the WASP Virtual Museum to see the Nebraska Memorial Honoring 19 WASP and artifacts submitted by her daughter, Peggy King.