On Saturday, June 12, 2010, a monument to the nineteen Nebraska Women Airforce Service Pilots was unveiled at a dedication ceremony in the Veterans Memorial Garden, Lincoln, Nebraska. It had been almost 66 years since the organization had been disbanded, and the women had declared Nebraska their home. They had received little if any recognition for their efforts and contributions to the War effort.

Three years ago, a member of the Veterans Memorial Garden Committee approached Diane Bartels and suggested the Garden needed to honor the women pilots. The Garden has over two dozen monuments, remembering and honoring all veterans of all branches of services throughout the history of the United States.

Through the help of the WASP Archives at Texas Woman’s University in Denton and the Women In Military Service For America Memorial in Washington, D. C., Ms. Bartels began the research to locate family and friends. When she went to Washington D.C. in March to accept the Congressional Gold Medal for Evelyn Sharp, the WWII ferry pilot from Ord, Nebraska, more connections were made.

The front of the polished black granite monument, in addition to their respective hometowns, bears the names the women held when they applied to the WASP. An engraving of a B-17 escorted by a P-38 and P-51 “fly” above those names. The insignia and wings of the Women’s Auxiliary Ferrying Squadron and the Women Airforce Service Pilots are engraved on the front edge of the attached bench.

On the back of the monument, in addition to the engraved front and back of the Congressional Gold Medal, is an abbreviated history of the WASP:

Between 1942 and 1944, 1,102 women served as civilian service pilots for the U.S. Army Air Forces. They participated in instructor training, towing targets for air-to-air gunnery and ground-to-air anti-aircraft practice, transporting personnel and cargo, and ferrying airplanes to training fields and embarkation points. This freed male pilots for combat.

The original group, the Women’s Auxiliary Ferrying Squadron (WAFS), proved women could fly the Army airplanes. Evelyn Sharp from Ord, Nebraska, was the seventeenth of its twenty-eight members. In 1943, the women pilots were re-designated Women Airforce Service Pilots (WASP).  By December, 1944, when they were unceremoniously disbanded, the women had logged over sixty million miles in military airplanes.

In 1977, Congress granted veteran status to this group of pioneering women whose contributions had largely been unrecognized. Their ground-breaking steps, however, had paved the way for all women who serve valiantly in the U.S. military today. On March 10, 2010, the Women Airforce Service Pilots were awarded the Congressional Gold Medal for their service in World War II.

On the day of the dedication, low ceilings kept the P-38 and the BT-13 safe at home in their hangars. However, the local PT-17, AT-6, and the P-51 thrilled hundreds of attendees with their fly-over.  In remarks made during the program, Bartels shared anecdotes of each of the nineteen women who left the security of home and went off to serve their country in a manner no American woman had done so previously.

Mary Williamson from Omaha, (pictured with Diane Bartels) a trainee in the last class, was the only one of the four still living with Nebraska ties who was able to attend the dedication. When Ms. Bartels presented her 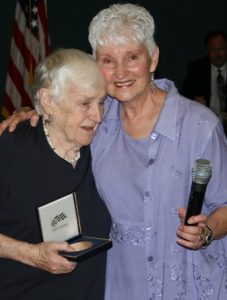 with a Congressional Gold Medal, everyone spontaneously stood and offered their appreciation for her service with resounding applause.

When Mary could speak, she acknowledged all her “sisters in the sky.”
“I wish they could be here,” Mary said reflectively.

Many of those in attendance felt the same way!

Visit the WASP Profiles to learn more about these amazing women’s stories!