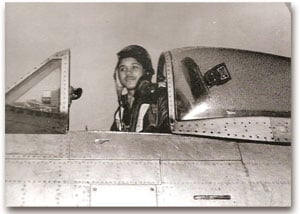 First Lieutenant Halbert Alexander was assigned to the 99th Fighter Squadron. He also flew as alternate pilot for the first Gunnery Meet in May of 1949.

The then Chief of Staff of the Air Force sent a directive to all the fighter groups in the United States, stating there would be a competition between the three highest scoring fighter groups. This was the first Gunnery Meet the Air Force ever held.

There were only two trophies to be presented, one for best team and one for best individual, and Col. Benjamin Davis, 332nd Group commander, told his four pilots, “If you don’t win, don’t come back.”

The 332nd won the weapons meet, but Temple was aced out of the best individual award after the panel staffing mission. However, in print, the 332nd was never recognized as the winner.

The trophy somehow disappeared, but Zellie Orr, president of the Tuskegee Airmen chapter in Atlanta, made it her mission to find the trophy. After five days she found it in the storage area of the National Museum of the U.S. Air Force at Wright Patterson AFB, Ohio.

Halbert Alexander was later killed in an F-86 Aircraft accident over one of the New England States. 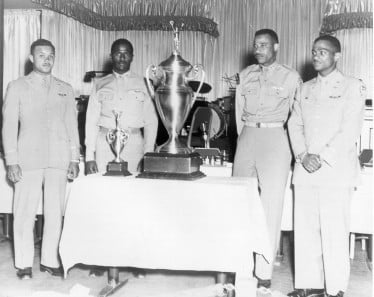 Gunnery team members, shown in this 1949 photo with their trophy, are (from left) 1st Lt. Halbert Alexander,

Read more about the Gunnery Meet