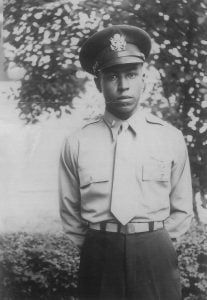 Tuskegee Airman pilot Joe Gomer was born on June 20, 1920 in Iowa Falls, Iowa. The Gomer family was one of only two African American families in their small town. Growing up, he was fascinated by model airplanes and dreamed of becoming a pilot. He worked in his father’s janitorial business from the age of 12.

Gomer and his brother Charles attended Iowa Falls High School, and in 1938 he was the school’s only African American in his graduating class. Sadly, his father passed away that same year. His community rallied together to help fund Gomer’s attendance at Ellsworth College to study pre-engineering. He earned his degree and continued on at the school to attend their flight training program, learning to fly in a pasture outside of town.

As the United States marched into World War II, Gomer enlisted in the Army in July of 1942 at the age of 22. He applied for and was accepted into the new aviation cadet training program for African Americans at Tuskegee Army Airfield in Tuskegee, Alabama. He would become the first black officer in the U.S. Army Air Corps from the state of Iowa.

After earning his wings in May of 1943 and completing all advanced training, Gomer deployed to Italy with the 301st Fighter Squadron of the 332nd Fighter Group. In combat, he flew 68 missions over Italy and Germany. He had several close brushes with danger, including a crash landing in a P-39, a lost canopy while flying a P-51 and survived being riddled by German bullets in a P-47.

Even though he bravely served his country during the War, Gomer experienced the sting of racism, regardless of his status of military officer and World War II combat pilot. Leaving his hometown and traveling to Alabama, then around the world, Gomer came face to face with unjust and cruel treatment. Even in the theaters of War, Gomer and his fellow Tuskegee Airmen remained segregated from their white counterparts and were treated as inferior to German prisoners.

“We were fighting two battles. I flew for my parents, for my race, for our battle for first-class citizenship and for my country. We were fighting for the 14 million black Americans back home. We were there to break down barriers, open a few doors, and do a job.”

“But we’re all Americans. That’s why we chose to fight. I’m as American as anybody. My black ancestors were brought over here, against their will, to help build America. My German ancestors came over to build a new life. And my Cherokee ancestors were here to greet all the boats.” ~Joseph P. Gomer 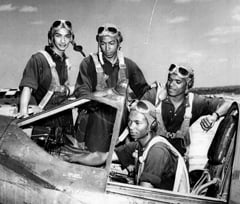 Flying out of Salerno, on the west coast of Italy, Gomer’s unit provided convoy escort for the thousands of allied ships that were pouring supplies and troops into the campaign to kick the Germans out of Italy. Patrolling thousands of feet above the Mediterranean, he would gaze at the line of ships that seemed to him to stretch out for miles and miles across the blue water. Another site he remembers is when Mount Vesuvius erupted in March 1944. “I remember taking off that day and swinging over the coast. I could see all that red lava just flowing down. A beautiful sight.”

Later, his mission was changed from convoy escort to bomber escort. They even stuck to their bombers when black puffs of flak burst among the formations – the point at which the German fighters broke off. “Flak doesn’t discriminate. Those German 88’s could get you if you flew straight for 17 seconds. I remember one burst hit our squadron commander.” Joe recalled. The 301st then traded in their P-39 Cobras for the P-47 Thunderbolt, a seven-ton fighter that impressed them with it’s sheer size. While it was a good dependable fighter, it didn’t compare to the sleek P-51 Mustang which the unit later received. It was his dream aircraft and his favorite. His unit kept busy, and while in Italy it flew 1,500 sorties and downed 111 enemy aircraft including the sinking of one German navy destroyer while losing 66 of their own. Three of the casualties were his tent mates, so a ground officer was put in his tent to keep him company. He himself had a few close calls. He crash-landed a P-39, lost his canopy, and was bullet ridden in a P-47 by a Me-109 German Fighter. He looked out of his cockpit in time to see a line of 20mm cannon holes stitch his wing right to the fuselage. As the German aircraft flew past him, he recalls the swastika on its tail assembly “big as day.”

After 68 sorties (for white pilots the maximum was 50), he asked to be rotated out. On Christmas Day, he skipped Christmas dinner to make sure that he would get to the troop transport ship in time to board in Naples, headed for the states. When it came time to board, he reported to the officer who was checking off names on the passenger list. Gomer’s name had a “N” behind it. The letter “N” in the segregated, race-conscious military of the times stood for “Negro”. He was ordered to the end of the line by the red-necked captain, and not allowed to board until all the white passengers went before him. It was dark before he got on board, but he was on his way home. Upon his return to the United States, he helped train other Black pilots at Tuskegee.

Along with his fellow fighter pilots, he found intolerance within the ranks of the U.S. Air Force during the war. One example in particular took place during his units stay on the Italian front.

“A couple of our fighters rescued a crippled bomber and brought them back to base. The bomber’s flight crew came over to look us up and when the pilot discovered there was nothing but black faces, he turned around and walked away.” The pilot did not realize that the P-51 pilots flying cover for him were African American. He was heard to say under his breath, “It ain’t so.”

They fought racism on the ground when they were not fighting the Germans in the air.

“We shared the sky with white pilots, but that’s all we shared. We never had contact with each other. German prisoners lived better than black servicemen…and the Germans treated us better than the Americans did. Our service is something that just never got into history books. It was just ignored.”

Racism did not dissuade Gomer from doing his duty as both a pilot and an African American. There was a contradiction between fighting for democracy overseas while facing the denial of civil rights back home.

After the war, black aviators remained in the segregated unit and Gomer was flight test maintenance officer with the 332nd at Lockbourne Air Force Base in Ohio. He remained with the Army Air Forces after the war and was still in service on July 26, 1948 when President Truman signed Executive Order 9981 integrating the United States Armed Forces. In 1949, the Army Air Forces became the Air Force and the Black units were integrated. There, his assignment as Chief of Reconnaissance and Helicopter Aircraft Headquarter Tactical Air Command at Langley Air Force Base in Virginia, qualified him to fly helicopters. During the Korean War he served with the 315th Air Division in Japan in support of the Korean War. He was the Wing Technical Inspector responsible for reviewing all technical matters which included the status of (96) C-119s and (27) C-47’s.

After that war in 1955, he sought duty as a helicopter pilot but the Air Force, recognizing his experience as a maintenance officer, assigned him to Andrews Air Force Base in Maryland. While there he maintained the first Air Force helicopter flight established to transport President Dwight D. Eisenhower and other officials in the Washington, D.C., area. Later Air Force assignments trained him in air defense and nuclear weapons. The latter took him to the French River, just north of Duluth, Minnesota where he served as a member of the Air Defense Missile Squadron. He earned the Missile Man Insignia, and became a nuclear weapons technician.

Because career opportunities for African Americans were limited outside the military, Gomer stayed in the Air Force for 22 years, retiring as a Major in 1964. He chose to settle in Minnesota with his wife Elizabeth and two daughters, Tanya and Phyllis. Working for the United States Forestry Service as the local personnel officer, he earned meritorious recognition for his work in providing equal opportunities for minorities. Upon retirement in 1985, the Secretary of Agriculture, in ceremony in Washington, presented him with a Superior Services Award for his work with minorities and women.

Into his retirement, Gomer remained active even very late in his life, giving his time talking to school groups and at community events about the Tuskegee Airmen and the importance of education. “People can be anything they want to be now,” he said in a 2007 interview. “There is no glass ceiling. Education is the key.”

For his service as a Tuskegee Airman and community leader, Gomer was inducted into the Iowa Aviation Hall of Fame in 2004. He received a Doctorate of Humanities from the Board of Trustees of Ellsworth College in 2004 and their Distinguished Alumni Award in 2009.

Gomer passed away in October in 2013. There are two statues in Iowa to honor his life and service located at Duluth International Airport in Minnesota and on the grounds of Ellsworth College in Iowa Falls, IA. 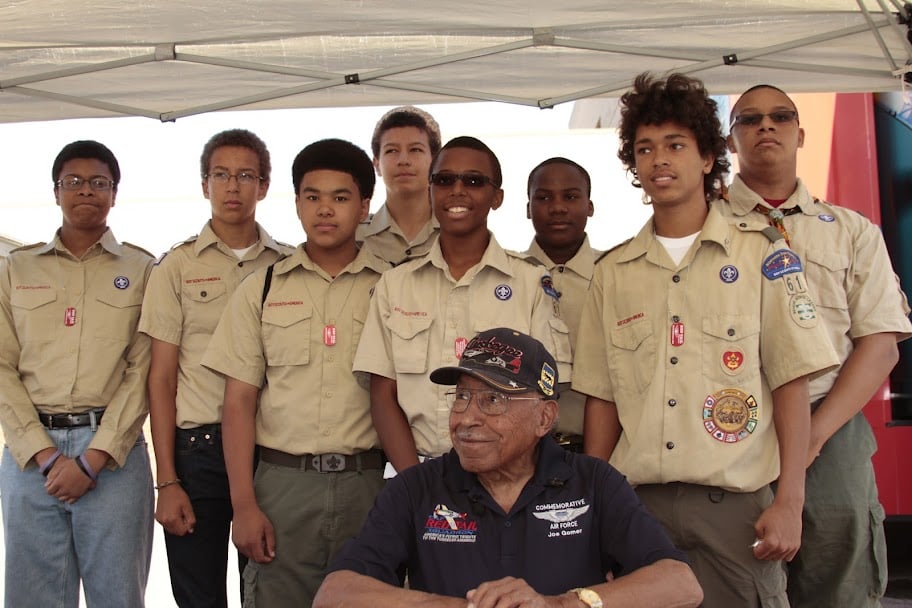 Major Joe Gomer poses with some Boy Scouts in attendance at the RISE ABOVE Traveling Exhibit. Photo courtesy Gary Chambers 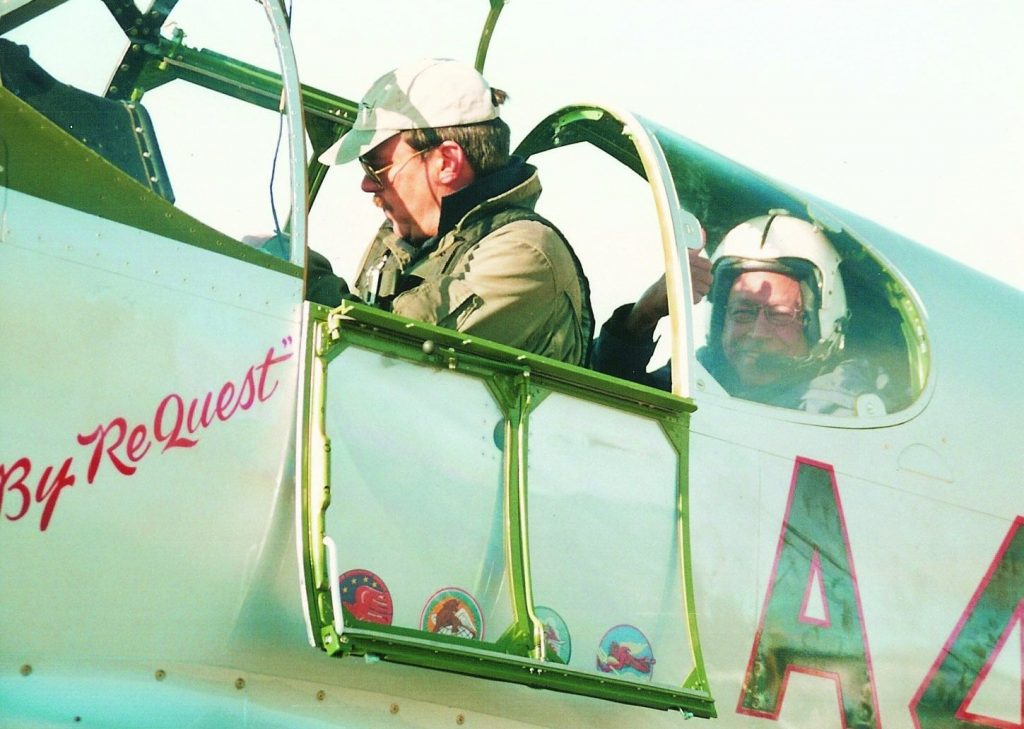