THE OBVERSE:    It depicts the portrait of a WASP with three pilots in the foreground in flight uniforms walking toward their aircraft.  The clean lines of the edge are strategically broken by the aircraft, the pilot, and the feet of the women pilots ‘crossing the boundaries’ and ‘breaking thru the barrier’ of the edge.

The AT-6 on this design, indicated by the number 264, represents the North America AT-6 “Texan” advanced trainer flown by pilots who went through Army Air Forces flight training. EVERY pilot had to master the AT-6 before graduating.

THE REVERSE:   It features the three aircraft that are symbolic of the many types of airplanes flown by WASP:  trainers, fighters, and bombers.

The AT-6  on this design, indicated by the number 264, is flying in formation and represents aircraft flown by WASP across America as engineering test pilots and other missions critical to the training of Army Air Forces pilots during World War II.

The P-51  “Mustang” was the fastest fighter aircraft in the Army Air Forces’  arsenal and represents the FERRY COMMAND.

The B-26  (Martin Marauder), indicated by the number 967, represents the TRAINING COMMAND  and  bomber pilots.  WASP flew this twin-engine bomber initially as an experiment to prove to the male pilots that the plane was safe to fly, and then as a tow target aircraft for air- to-air target practice to train gunners for combat.

The WASP wings are depicted at the base of the design.

The inscriptions are: ‘THE FIRST WOMEN IN HISTORY TO FLY AMERICAN MILITARY AIRCRAFT’   and ‘ ACT OF CONGRESS,  2009’.

It was designed and sculpted by U.S. Mint Sculptor-Engraver Don Everhart 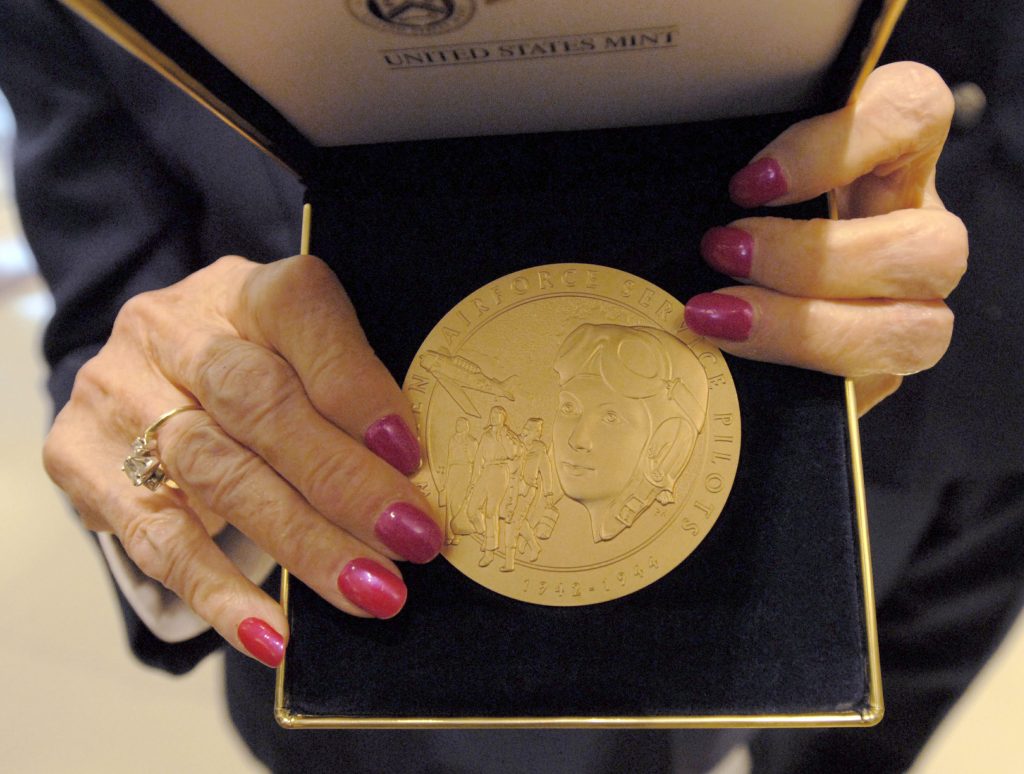 Betty Wall Strohfus, a Women Airforce Service Pilot from Minnesota, displays her copy of the Congressional Gold Medal at the Capitol March 10, 2010. More than 200 WASPs attended the event, many of them wearing their World War II-era uniforms. The audience, which Speaker Nancy Pelosi noted was one of the largest ever in the Capitol and too large to fit into Emancipation Hall, also included their families, as well as the families of those who have since died or couldn’t travel. (U.S. Air Force photo/Staff Sgt. J.G. Buzanowski)