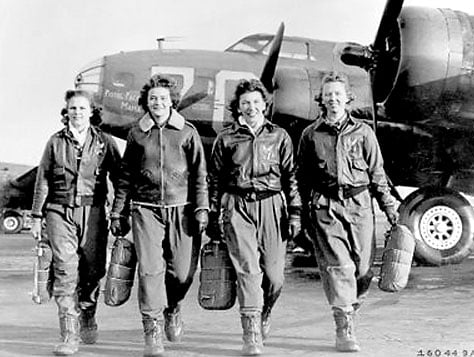 The lady pilots of WWII began as the WAFS (Women’s Auxiliary Flying Squadron). Recruits had to be between 21 and 35 years old, in good health, in possession of a pilot’s license and 500 hours of flight time. Additionally, women were also required to be at least five feet and two inches tall. Over 25,000 women made application to join the WASP; 1,830 were accepted but only 1,074 completed the training. The applicants all had prior experience and airman certificates. Several WASP had been trained previously in the Civilian Pilot Training Program (CPTP). They earned $250 monthly but were required to purchase their own uniform, plus provide and pay for their room and board.

Another group was known as the WFTD (Women’s Flying Training Detachment) under the experienced leadership of Jacqueline “Jackie” Cochran, a professional and world-renowned aviatrix. After the war, Cochran was the first woman to break the sound barrier.

Cochran wanted a single unit to control the activity of women pilots. With the backing and influence, of First Lady Eleanor Roosevelt, plus the rank, and muscle, of General Henry ‘Hap’ Arnold and General Roberts Olds, the WASP program merged the WAFS and the WFTD into one unified training and ferrying program in July of 1943. The theory behind the programs for female pilots was to ‘free-up’ male aviators for combat duty. During the war, the WASP pulled duty at 122 airbases in the U.S. and delivered 12,652 aircraft of 78 different types, which amounted to around 75 to 80 percent of all ferrying missions. WASP freed approximately 900 male pilots.

The initial training, first class only, was conducted at Howard Hughes Field in Houston, Texas. Cochran, disappointed with the school and training facilities, moved the WASP to Sweetwater, Texas and an airstrip known as Avenger Field.

Most of the female pilots were Caucasian. However, Hazel Ying Lee and Maggie Gee, both Chinese Americans, also qualified to be a WASP. Hazel Ying Lee was the last WASP to die during the program. Ola Mildred Rexroat, a Native American Oglala Sioux from the Pine Ridge Indian Reservation in South Dakota also flew as a WASP

An African-American applicant, Mildred Hemmans Carter, was turned down because of her race, in spite of obtaining at age 19 a Bachelor of Arts degree from Tuskegee Institute and retained an aviation certificate. She was also rejected by the Tuskegee Airman program. Carter was recognized retrospectively as a WASP 70 years later and at age 90 took her last flight.

No records exist of how many African-American women made the final interview, but they were all disregarded. Cochran told one black applicant, Janet Harmon Bragg, that, “It’s difficult enough fighting prejudice aimed at females without additionally battling race discrimination.”

Considering the nation was still in the ugly grips of segregation, Cochran may have had no other choice. WASP were belittled by many male pilots and in some cases sabotaged. The New York Daily News, TIME, and the Washington Post advocated for the WASP to be replaced by men. Journalist Drew Pearson of the Washington Times Herald accused General Arnold of being influenced by Cochran’s “feminine wiles.”

One base commander at Camp Davis, a Major Stephenson, told the WASP that, ‘both they and their planes are expendable.’ In one crash, Cochran found sugar in the engine at a WASP crash site. A total of 14 confirmed events of improper maintenance on towing planes are a matter of record at Camp Davis as were many incidents of the wrong octane fuel being used. At some bases, ‘objectionable’ aircraft were given out to the WASP. The base commander at Love Field in Dallas was officially castigated for treating women unfairly.

Initially, the age cap of 35 for lady pilots was tailored, ‘to avoid the irrationality of women when they enter and go through menopause.’ The male-dominated military had determined the age of 40 was most likely when women entered menopause so if the war lasted 5 years or longer the WASP would only then be on the brink of ‘debilitating irrationality.’ WASP were grounded during menstrual cycles by many base commanders, believing that the female pilots were ‘less efficient’ during that time of the month. Air brakes were applied to that type of mentality after flight records disavowed the asinine claim.

Military planes did not have proper facilities for women to use the bathroom, therefore when ferrying planes, the WASP had to land to find a restroom. Grabbing a quick bite to eat could also prove difficult since many restaurants refused service for WASP because the ladies were wearing pants.

Albeit, the WASP flew just about every aircraft in the military inventory, including a few exceptionally qualified women who flew and tested rocket-propelled and jet-propelled aircraft. If a new aircraft was difficult to fly, like the YP-59 Airacomet – the first twin jet-engined fighter aircraft produced in the United States – and originally the prone-to-fire B-29 bomber, General Arnold would recruit WASP to fly the planes to ‘embarrass’ the men into strapping into a cockpit.

Dorthea Johnson and Dora Doughtery Strother were chosen to fly the B-29 to Alamogordo, New Mexico, where the atomic bomb was being developed. Large crowds at Alamogordo awaited the female aviators to see them land. After that flight, male pilots ceased grumbling when assigned training on the B-29s.

All legislation put before Congress during WWII to confer the WASP with military status were defeated, even with General Arnold’s backing and positive testifying. In the area of pay, as with debates that still rage today, WASP received two-thirds the paycheck of their male counterparts. With the war nearing its end, the WASP were disbanded in December of 1944.

These courageous lady aviators flew over 60 million miles, handled the controls of advanced fighters, heavy bombers, transported much-needed cargo, and even simulated hazardous strafing missions. Most of the WASP records were sealed for 30 years after WWII ended. Historians and researchers and journalists poured over other classified films, records, and reports when they were finally released, but the WASP story was seldom told or reported until the late 1970’s.

One incident in 1976 really stirred up the WASP nest. The Air Force proudly announced they were accepting women in their flying program and made the claim, ‘it’s the first time that the Air Force has allowed women to fly their aircraft.’

Hell hath no fury as a WASP scorned. The remaining WASP lobbied Congress to be militarized and persuaded former Presidential candidate and Senator Barry Goldwater to help with their crusade. Goldwater had ferried military aircraft during WWII just as the WASP had done. Goldwater was met with shocking prejudice in Congress. Before Goldwater’s help, a bill was introduced as early as 1972. It was defeated. With Goldwater’s persistence and that of Colonel Bruce Arnold, son of General Hap Arnold, the walls of prejudice started crumbling down.

The G.I. Bill Improvement Act of 1977 provided WASP with VA benefits. Former WASP were issued Honorable Discharges in 1979. Each WASP was awarded the World War Two Victory Medal in 1984, with many of the medals accepted by family members of deceased WASP. In 2009, WASP were inducted into the International Air and Space Hall of Fame at the San Diego Air and Space Museum. President Barack Obama awarded the Congressional Gold Medal to the WASP on July 1, 2009.

The Army has ruled twice that the 1977 legislation did not mandate the burial of a deceased WASP at Arlington National Cemetery. Perhaps the fine print disallows these women a final resting place at Arlington, and granted the burial space at Arlington is quickly disappearing, yet as of 2016 only WASP cremated remains can be interred at Arlington, but not a ground burial.

Finally, in 2016, seventy-five years later, WASP can finally can be buried at Arlington National Cemetery, thanks to bipartisan efforts.

Erin Miller of Maryland had brought the bill to the House after her grandmother Elaine Harmon was denied entry. “It’s not the funnest thing to have to ask Congress to pass a law to bury your grandmother,” she said. But after starting a petition on change.org and asking friends, neighbors and total strangers for their signatures, Miller’s bill picked up traction.

Sen. Joni Ernst, R-Iowa, who sponsored legislation in the Senate to help the WASP, said the change was needed to recognize the service and sacrifice of the women.

On May 20, 2016 President Obama signed the bill into law that allowed WASP to be able to be interred at Arlington National Cemetery. The bill Obama signed reversed McHugh’s decision.

Women Airforce Service Pilot Elaine Harmon was finally laid to rest at Arlington National Cemetery on September 7, 2016 in a service that was both reverent and joyful.

Perhaps current history and social teachers need to research and teach a new generation of the loyalty and love of country that came with the territory as a gift, not something to endure or protest. As one WASP commented, “We were children of the Great Depression. It was root hog or die. You had to take care of yourself. Nobody owed us anything.”